Lindsay Rane Carter is a 2021 Woman of Impact 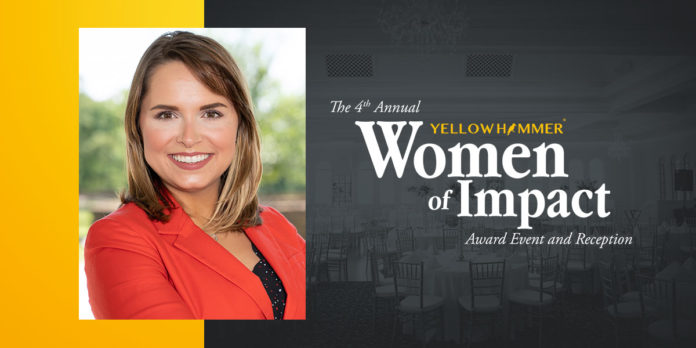 With a passion for her community, her state and the company she works for, Lindsay Rane Carter regularly makes an impact in her small town of Abbeville, as well as across Alabama. Currently the director of External Affairs at Great Southern Wood Preserving, where she began her professional career in 2012, it was a traumatic accident that changed the entire trajectory of her life.

Not long after graduating from Auburn University in 2010, where she was a member of the equestrian team, Carter was in Santa Fe on a business trip with her father — founder and CEO of Great Southern Wood Preserving, Jimmy Rane — when she was involved in a horseback riding accident miles from civilization, accompanied only by her guide.

“We were riding out through the desert, a place I had never been before,” she recalled. “I knew nothing about this country, but I was 22 at the time and I thought I was bulletproof. I ended up having a really terrible accident. I didn’t know it at the time, but the horse and I somersaulted; the horse literally fell on top of me. I was out in the wilderness, a good hour from the closest hospital.”

The guide managed to get in touch with someone and provide enough of a description of their location so they could be found. A man finally came with a truck and, after loading Carter into it, who couldn’t move one of her legs at that point, drove her to the hospital. There, a trauma doctor was called to come in but declined, saying he didn’t think she would make it through the night. Her parents were told the next 48 hours were critical, but she might not survive.

“The crazy thing was that my mom, whenever she left me that day, said she just had this bad feeling and she started praying, ‘God, please protect my child.,’” Carter said. “As they started running tests at the hospital, they found I had no internal bleeding, no injuries to my vital organs, no concussion or anything.”

What Carter did have was a broken tailbone and her pelvis was broken in three places. Beyond that, she suffered no other injuries.

“It literally was a miracle,” she said. “I didn’t even have a black eye. I was so blessed. The trauma doctor finally came in two mornings afterward to say he just wanted to shake my hand because I was the first person to survive something like this. I was like, ‘I’m not shaking your hand, no way!’”

Carter recuperated in bed for eight weeks, followed by intense amounts of physical therapy. Doctors told her she would never run again, she would always walk with a limp, she would be unable to bear children.

“After all I had been through, I didn’t let that affect me,” she said. “I didn’t even listen to it. I run three miles regularly now. I have a child. I don’t walk with a limp. So, it just created a grit in me to heal and to be stronger than ever.”

And yes, Carter is still an animal lover. In fact, she now has eight horses, four dogs and three cats. She even got right back on the horse after her accident. Literally.

Once healed, Carter decided to move to Utah for a year, where she worked taking people on guided horseback rides. She credits her time in Utah as creating independence, and by the time her job there came to an end, she knew her next step: law school.

Carter came home from Utah and enrolled at Faulkner University’s Thomas Goode Jones School of Law in Montgomery, a choice she says she made because she longed to be in the Capital.

During her time at Jones, Carter cultivated a love of the government, the state and the people in it. She knew she eventually wanted to do something in that line of work. While she was deciding where to go and what to do with her new law degree, though, her dad began calling her and asking her to work for him. She resisted at first but ultimately agreed to come on part-time so she would still have time to pursue other interests.

“So we agreed on that,” she said. “And that lasted about a week. Then it went full steam ahead.”

As associate in-house counsel at Great Southern, she started out doing legal work only, but as the company grew, so did her role. More responsibility was slowly added to her plate, including government affairs, which she was eager to take on.

“I love getting to see people across the state and getting to work with them and work on issues that I feel are super important to us and our company, but also affect so many people,” Carter said. “It’s a very rewarding job for me.”

Carter serves on the Business Council of Alabama (BCA) and was appointed by Governor Kay Ivey to the Alabama Innovation Commission (Innovate Alabama), which focuses on entrepreneurship, innovation and technology.

“I believe we have some amazing people in this state,” Carter said. “Small businesses are the backbone of our communities. There are people who, if they had just a little bit of help, whether it’s financial resources or a mentor to bounce ideas off of, I think that they can do amazing things. So I’m so grateful to be a part of this and I can’t wait to see what it does.”

Carter credits the success she has seen in her career with her team and the people she works with on a daily basis.

“Besides my family and my faith, the biggest thing for me is my team,” she said. “What keeps me coming back every day is my team and the people I work with. They’re the best and I’m proud to be associated with them because you just don’t find people like this everywhere.”

As her team grows stronger and as the company grows, Carter says she is fortunate for the opportunity to look at how she can make a bigger difference in her community and her state.

“I’m just trying to continue to find things that fit with who I am,” she said. “The things that are important to me and that I’m passionate about so that I can do my part to help make our state the best that it can be.”

The list of things Carter is passionate about is long, but they all seek to serve the communities that make up the Yellowhammer State in some way, such as bringing awareness to the natural beauty of Alabama. Education for girls is extremely important to her, as well, particularly for girls in small towns. Carter started a program several years ago in which she would take five girls to Montgomery to meet their lady Governor and other female legislators.

“I wanted them to see that women are in places they’ve never been before and women can be anything they want to be,” she explained. “Continuing to give girls exposure and let them know that you don’t have to think within the confines of your town, that you can think about where you want to end up in the world. And so many great people have come from small communities. So, I’m really passionate about continuing to find ways that I can help girls.”

Investing in future businesswomen hits close to home for Carter, who works in the traditionally male-dominated industry of building products. Sometimes the only woman in the room, she values honesty above all else and staying true to herself.

“I’m a big believer in diversity of thought and having people at the table who think very differently,” she said. “And being on the team that I’m on, we value that. So, coming in and really earning the respect of my teammates, that’s something I fully believe in and it’s an honor to earn their respect.”

Carter doesn’t have a ton of downtime, but she works hard to make the most out of her busy schedule, planning her weeks and days ahead of time, often down to the hour. She prioritizes spending time with her husband and their seven-year-old daughter and places an emphasis on keeping her mental health in check.

“To me, it’s as important as my physical health,” she said. “We do not prioritize it enough, we do not take care of ourselves mentally enough, so I make that top priority.”

Carter credits her husband, Chance, with making up the largest part of her support system and her biggest supporter overall.

“He really is my teammate in everything and I wouldn’t be where I am without him,” she said.

Yellowhammer News is proud to name Lindsay Rane Carter a 2021 Woman of Impact.

Sara Watkins is a contributing writer for Yellowhammer News and SoulGrown Alabama. You can find her on Facebook here.