Linda Sewell is a 2021 Woman of Impact 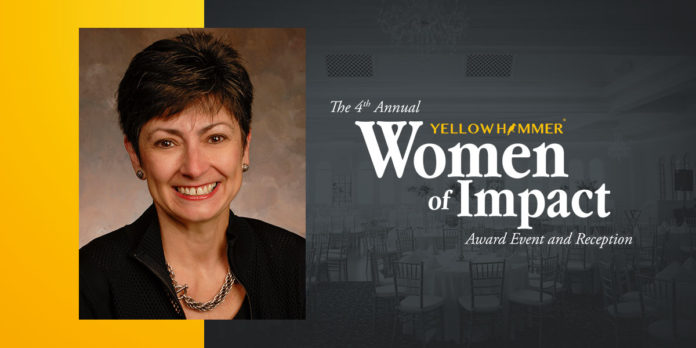 Alabama is blessed with an abundance of out-of-state professionals who have come to call the Yellowhammer State their home. These individuals contribute day in and day out to the state’s economy and serve a variety of charitable, community-oriented causes. Among this list of caring, hard-working professionals is Linda Sewell.

Within the organizational operations of every successful corporate structure sits a skilled and artful conveyor who ensures community partnership and advances the company’s charitable initiatives with exceptional communication skills. Sewell is no doubt one of the state’s most skilled professionals in this regard.

Sewell is the vice president of public affairs and communications for Birmingham-based Coca-Cola Bottling Company United, Inc. In her position, Sewell is responsible for corporate communications, carrying out the company’s government and community relations activities, as well as charitable giving.

A longtime public affairs professional, Sewell has served nearly four decades in the field of community relations and corporate communications.

For Sewell, it is rewarding to serve an organization which places an emphasis on being an outstanding corporate citizen and immerses itself within the communities it operates. Coca-Cola Bottling Company United is a fifth-generation family-owned business with its foundational roots in the Yellowhammer State dating back to 1902.

Sewell tells Yellowhammer News that she is grateful to work for a company that invests its efforts to better the state and community which it calls home, values which Sewell holds dearly.

“Coca-Cola United is really like a family in and of itself even though it’s a $3 billion business with 10,000 associates,” she says. “The culture of the company and the family spirit and the foundation of wanting to serve its employees, serve its community, serve its customers is the fundamental thread in everything we do every day.”

Sewell continues, “Being with Coca-Cola United has just been an extraordinary experience because of the culture of the company and what it stands for – and its mission and its purpose – which it lives every day. To be part of that kind of company is really a blessing.”

Sewell says it was an easy choice in deciding to work for a company that operates in the best interests of its associates and communities.

She adds, “Joining a company with a strong corporate culture and a philosophy to serve was very important to me.”

Her work in serving the community does not end in her capacities at Coca-Cola United as she has taken on important roles to positively impact the people around her.

Sewell has served on the executive committees of Heart Gallery Alabama and Red Mountain Theatre Company. Additionally, she sits on the Board of Visitors for the University of Alabama’s College of Communications.

She has also served on the boards of many other civic and nonprofit organizations throughout Alabama, including McWane Science Center, Kid One Transport System, Aldridge Gardens, Birmingham and Tuscaloosa Chambers of Commerce, and the Business Council of Alabama.

Sewell has been widely recognized for her community service. She was a This is Alabama’s “2017 Women Who Shape the State” honoree and Heart Gallery Alabama’s 2017 Karen Nomberg Volunteer of the Year. She also earned recognition as the 2016 Girl Scouts “Woman of Distinction.”

Family is of the utmost importance to Sewell. She and her husband Steve reside in Hoover with their two teenage girls, Ana and Abby, both of whom the couple is blessed to have adopted, each at age two. She describes becoming the mother of her two daughters as an incredible moment in her life.

Sewell is a native New Yorker and holds an undergraduate degree in communications and journalism from St. John Fisher College in Rochester, NY. She went on to obtain her MBA in marketing from Pace University.

Sewell has now called Alabama home for more than 28 years. She tells Yellowhammer News that the transition from metropolitan New York to Alabama was made easy due to the hospitality she was shown by the many Alabamians who embraced her with open arms.

“It was really easy because the people in Alabama are so hospitable and so warm and embracing,” says Sewell. “They took me in as part of the Alabama family immediately, so the transition was really easy and I believe that is one of the reasons why I stayed in Alabama because I felt at home here pretty early on. Always from the very start I felt welcomed and embraced by the people in Alabama.”

It was by way of her moving to the state that she met her husband Steve, who works in economic development. Her husband’s organization played a pivotal role in recruiting her former employer, Mercedes-Benz U.S. International to Alabama.

In total, Sewell had a 25-year career with Mercedes-Benz. She began working for the luxury carmaker in the company’s marketing headquarters in New Jersey in 1981, holding positions in public relations, operations and leading the development of the company’s corporate change initiative.

After more than a decade serving the company’s American-based operations, Sewell went on to take her expertise globally when, in 1993, she became director of communications for Mercedes-Benz U.S. International, the newly formed manufacturing company in Tuscaloosa, Alabama, responsible for producing and marketing vehicles for the world market. As director of communications, she had responsibility for the company’s government relations, corporate communications, international media relations and charitable contributions.

After Mercedes-Benz, Sewell took a short hiatus to spend time with her newly adopted daughters and her elderly parents, who moved to Alabama from New York. She then took her talents to Energen Corporation, the former Alabama-based publicly-held oil and gas company, where she oversaw the company’s strategic planning activities, led its political action committee and charitable foundation, and also managed the company’s corporate communications.

Her ascension to leading communications strategies for some of the most globally recognized brands was preceded by Sewell cutting her teeth in the journalism industry, when she was a reporter right out of college.

“Writing is something I loved to do as a child,” says Sewell. “The reason I became a journalist was because I wanted to change the world, and I thought journalists have the opportunity to do so through their stories. When I was recruited by Mercedes, initially it was a difficult decision to move into public relations,” recalled Sewell noting her passion for journalism.

“As I matured, I realized that you can make an impact and change your part of the world no matter where you are by how you live your life and the actions we take every day. That’s kind of been a personal mission,” she adds.

“The irony, in terms of journalism and writing, is I’ve had a fantastic 40-year career and I still write every day in my job,” Sewell says. “Communication is such an important tool in business and in my community service work – communication takes a lot of different forms. It is an important way to connect you with your publics, with your customers, and with your communities. Through communications we build relationships, and through relationships we can change lives.”

From her roots in journalism to managing corporate communications and public affairs of some of the most prestigious brands, Sewell has no doubt left her mark in a field that is critical to successful business operations.

With a servant’s heart and the talent she possesses, Sewell has certainly changed her part of the world. Alabama is truly fortunate to call her one of its own.

Yellowhammer News is proud to name Linda Sewell a 2021 Woman of Impact.