Kelsey Barnard Clark is a 2021 Woman of Impact 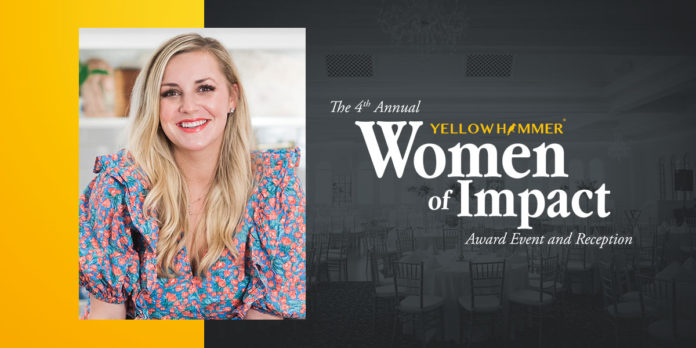 “A place where people are welcome.” Without hesitation, Kelsey Barnard Clark is confident in what she wants the legacy of her life to be. Spend just five minutes with the Top Chef winner and she’ll prove her southern roots run deep with down-to-earth and comforting conversation. Whether it be at her restaurant, KBC, in historic downtown Dothan, or in her own home with her husband and two children, Clark’s focus is always on the people around her.

At age 15, Clark entered the food industry working for a high-end catering company. From there, she knew she wanted a future in food but also knew she would have to carve her own path. After graduating from the Culinary Institute of America in New York City, she stayed to work savory and pastry in several Michelin-star restaurants. But working 110-hour weeks was never fulfilling, so she moved home to Dothan in 2012 to open Kelsey Barnard Catering and eventually her own restaurant. The fearless “Gulf Southern” chef went on to win season 16 of Top Chef on Bravo TV, stating that “it felt wonderful” to win and that it gave her “validation that all of the time away and the sacrifices were worth it.” Her likable personality came through on the competition show.

Ultimately, Clark is reinventing what success in the food industry looks like for women. She says to “make it your own. There’s not just one path.” She pursued a healthier life for herself, which has ultimately led to a healthier life for her family and staff, too. Clark doesn’t fit into just one mold. She is a chef, a mother, a wife, a boss and now an author of her own cookbook, all based out of her hometown of Dothan, Alabama. When asked if she thought living in Alabama contributed to her chosen lifestyle, she said absolutely.

“I’m not sure how possible this would be in a big city,” she advised.

Kelsey’s quick to let you know what she is most proud of is her team. Unlike many restaurants, KBC employs work-release inmates as staff members. She’s most inspired by women who don’t seek credit or accolades, who are humble, and love to be hospitable towards others. She’s used her success and platform to empower women who may not otherwise have the opportunity, and that reward has been her greatest honor.

As a 2021 Woman of Impact, Kelsey Barnard Clark is recognized for creating a new type of career for females in this world — one where they have the same opportunities to reach their full potential in their careers, home lives and personal lives.

Yellowhammer News is proud to name Kelsey Barnard Clark a 2021 Woman of Impact.