Kelly Caruso is a 2020 Woman of Impact 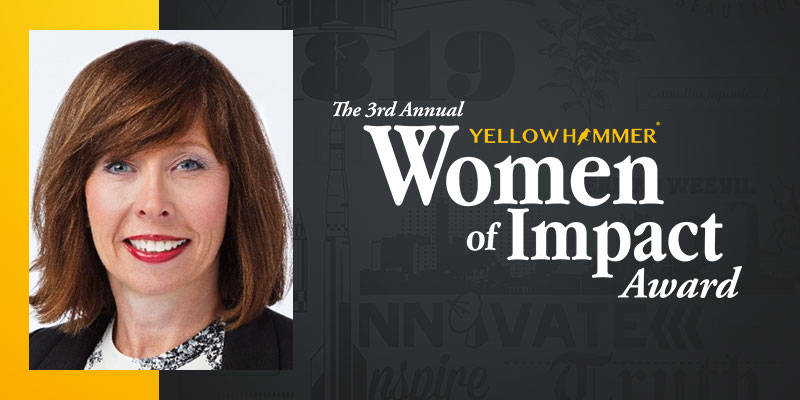 Since taking the reins as CEO of Shipt in 2019, Kelly Caruso has expanded and improved one of Alabama’s most successful technology companies. She is just getting started.

Under her leadership, Shipt has hired hundreds more employees, improved its offerings to customers and weathered the onslaught of demand brought by the coronavirus pandemic. Its logo now graces the top of the tallest building in Alabama’s biggest city.

Caruso spent more than two decades in high powered roles at Target, Shipt’s parent company. Her last position at Target HQ put her in charge of capturing the available market share when Toys “R” Us went bankrupt, an initiative for which she earned much praise from industry onlookers.

Caruso relocated to Alabama last year when she was announced as Shipt’s new chief executive.

Shipt, a company that allows customers to order groceries online or via an app and have them delivered the same day, was founded in Birmingham in 2014 and acquired by Target in 2017. It now operates as an independent subsidiary of the Minneapolis-based corporation.

Caruso, a child of a military family, moved several times growing up, including stints in Florida and Georgia before spending her high school years in Montana. She has a bachelor’s degree from the University of North Dakota, graduating in the early 1990s.

After college, Caruso took a job as a buyer for a department store named Yonkers, located in Des Moines, Iowa.

“I really loved that job because it was rooted in both art and science, and retail is just that,” she told Authority Magazine.

The enterprising businesswoman quickly found her way onto Target’s corporate ladder after a few stops at other retailers. At Target, the hardworking Caruso quickly ascended, becoming a vice president in 2011 and senior vice president in 2017 — during which time she handled a number of different roles.

Every available indication says the transition to Caruso from Shipt’s founder and original CEO Bill Smith was quite amicable, and spurred by Smith’s desire to find a new challenge.

“Kelly is a strong leader who shares a passion for Shipt’s mission,” wrote Smith in a blog post, further saying the two “worked closely to ensure a seamless transition.”

Caruso, similarly, had kind words for Smith, thanking him for his “outstanding leadership” and remarking that his “entrepreneurial achievements have changed the game in same-day delivery.”

Caruso said in an interview that the first time Shipt appeared on her radar was when Target announced the acquisition in 2017, and she quickly became a big fan of the company.

She relayed a story that one snowy Saturday she was inspired to try the app for the first time instead of dealing with the elements.

“I placed my order at 7am and by 9am, my groceries and essentials were in my kitchen and I was cooking brunch for my husband and my sons. For me, that time was priceless. From then on, I was a Shipt evangelist,” Caruso recalled.

In interviews, Caruso often speaks with deep affection about her husband, Giuseppe, and their two sons.

After taking the top job at the company, Caruso took care in media interviews to mollify Shipt employees who might have been fearful of being displaced by employees who had been with Target for longer.

“If you’re coming from Target, you know what I know,” she told the Birmingham Business Journal, adding that in her mind Shipt needs “leaders from different companies and different leaders sitting around that table.”

The executive has wasted no time in networking among the community of Birmingham’s high powered business leaders in the short time since she joined their ranks.

The letter, posted publicly near the height of the George Floyd demonstrations, commits the undersigned to promoting racial equity in their hiring practices and “to create economic opportunities for minority-, women-, and other disadvantaged business enterprises (MWDBEs).”

The group of Birmingham business leaders is not the only one in which Caruso is making an impact. She is also a director at large of the Network of Executive Women, a group that seeks to help advance women in business and workplaces across the country by providing networking opportunities, research and other programs.

Gender and racial issues are not the only societal challenges that have crossed Caruso’s desk since becoming CEO. The coronavirus pandemic caused an enormous surge in demand for the service that allowed people to receive their groceries without leaving their homes.

Shipt had to double its number of “shoppers” — the contractors who receive the orders, do the shopping and deliveries —  over a roughly seven-week stretch between early March and the end of April this year.

Every Shipt shopper was given the ability to get plastic gloves at Target for free, and the company instituted a policy that any shopper who tested positive for COVID-19 would be paid an average of their weekly earnings during the time they were forced to quarantine.

Gig economy jobs like Shipt shopping became backup employment for many who found themselves furloughed and unemployed amid the shutdown orders. Under Caruso, Shipt voluntarily paid out bonuses to its most active shoppers.

Shipt is now poised to take advantage of increased consumer awareness of online grocery shopping brought on by the pandemic.

Even before the pandemic, Caruso saw enormous potential for growth in the company she now leads. In multiple appearances, she has pointed to figures produced by Food Marketing Institute that estimate online ordering will make up 20% of the grocery shopping by 2025, a share that would equal about $100 billion in yearly spending. Online ordering currently makes up about 3.5% of grocery shopping, a coronavirus induced increase of 40% over last year.

Authority Magazine asked Caruso what advice she has found most helpful across the many challenges of her career.

Caruso responded, “For me, ensuring that I don’t ruminate on things I can’t control allows me to remain focused on solving problems at hand and moving forward. My journey has been sprinkled with really great times and other times that have tested me. Knowing that ‘it is what it is’ keeps me grounded and calm.”

Yellowhammer News is proud to name Kelly Caruso a 2020 Woman of Impact.