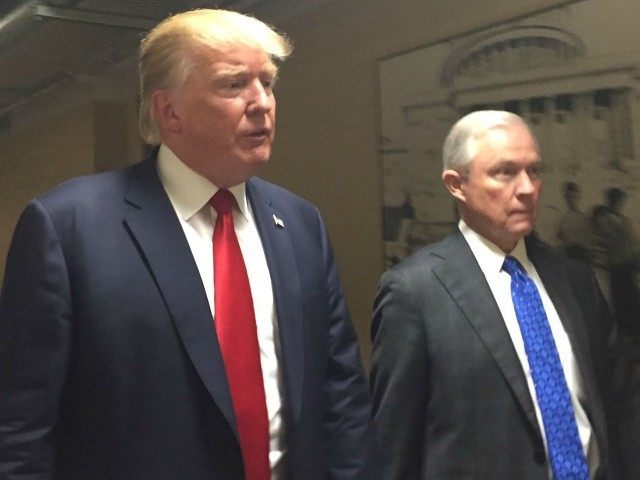 Prior to the firing of FBI director James Comey, Politico’s Eliana Johnson reported earlier today that U.S. Attorney Jeff Sessions and Deputy U.S. Attorney General Rod Rosenstein had a closed-door meeting with President Trump Monday, urging him to make this move. During that meeting, the President asked Sessions and Rosenstein to present their rationales in the now widely-circulated memos, which they each submitted to the President the next day.

As Politico points out, these actions now serve as President Trump’s first line of defense against the accusations that firing Comey was nothing more than his impulsive, snap-judgement decision. Clearly, the meetings and memos proved his decision was given considerable forethought.

Moreover, the article made the critical insight that Sessions’ initiative, and the fact that the President followed his advice in this matter, are strong indicators of the depth of their mutual trust and the Attorney General’s influence at the White House. As Ms. Johnson put it:

The drama was fresh evidence of Sessions’ role as a critical political player in the Trump cabinet. He has exhibited all the qualities of loyalty Trump most prizes: He was the first senator to endorse him, one of the only members of the upper chamber to embrace him enthusiastically during the presidential campaign, and, as his involvement in the Comey controversy demonstrates, he’s proved that he is willing to thrust himself into the breach and take political hits to advance the president’s interests.

One critical result of this move, Johnson noted, may be slowing any investigations surrounding Russia’s alleged influence over the campaign. This is ironic considering the President’s reported displeasure with Mr. Sessions when he recused himself from this investigation a few months ago. Now, however, the move is proving to not only be ethically sound, but wiser than most knew.

Aside from all the noise surrounding Russia’s influence on the campaign, Comey’s firing also served to place Mr. Sessions in full control of the Justice Department. To this point, the Politico story quoted Sessions’ friend and prominent appellate court attorney Chuck Cooper:

“Jeff Sessions is truly the star of this show…In all of the areas within the Justice Department’s jurisdiction, Jeff is moving in precisely the way that Trump had essentially promised his supporters that his administration would move — whether you’re talking about law and order, immigration, judicial selection, or any of the other big ticket items that come under the attorney general’s realm.”

In addition to earning the President’s trust and his strong leadership as the boss of DOJ, Mr. Sessions’ broader influence across the Trump administration is hard to ignore. As Johnson notes, Sessions’ protégés in Washington now include:

• His longtime friend and Yellowhammer Founder, Cliff Sims, is now the Special Assistant to the President and Director of White House Message Strategy
• His former Communications Director, Stephen Miller, is now a Senior Adviser to the President
• His former Chief of Staff Rick Dearborn, is now the White House’s Deputy Chief of Staff for legislative affairs
• His General Counsel on the Senate Judiciary Committee, Gene Hamilton, is now a Senior Adviser at the Department of Health and Human Services