Fox’s Tucker Carlson Tells Trump to Lay Off Sessions: “He’s One of Your Few Friends” 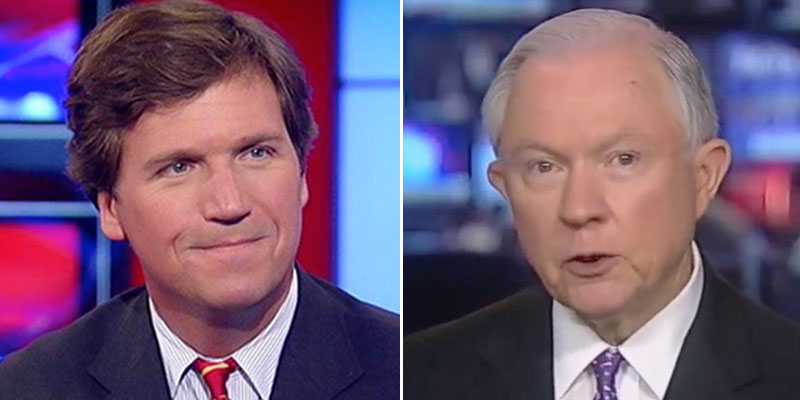 WASHINGTON, D.C. — During the opening monolog on his eponymous Fox News show last night, Tucker Carlson told President Donald Trump to stop attacking Attorney Jeff Sessions, as he recently did in an interview with The New York Times.

“For God’s sake, lay off Jeff Sessions,” Carlson said during his monolog. “He’s your friend — one of the very few you have in Washington.”

RELATED: Trump: I Never Would Have Appointed Sessions if I’d Known He’d Recuse Himself

Tucker to President Trump: for God’s sake, lay off Jeff Sessions. He’s your friend, one of the very few you’ve got in Washington. pic.twitter.com/IRiIoZWhKP

“Sessions has been the most effective member of the Trump cabinet. In return, the president attacked him in the failing New York Times,” Carlson said. “That’s not just a criticism; that’s an insult. It’s also a worrisome sign that the president may be forgetting who’s on his side.”

Earlier this week, President Trump expressed his frustration with Sessions over the Attorney General’s decision to recuse himself from the Russia investigation.

Yesterday, Sessions responded to the attacks in a press conference, stating that he will continue to serve “as long as that is appropriate.”

RELATED: Sessions Stands His Ground, Will Serve “As Long as That Is Appropriate”

“I have the honor of serving as attorney general. It’s something that goes beyond any thought I would have ever had for myself,” Sessions said a press conference yesterday. “[DOJ] will continue every single day to work hard to serve the national interests and we wholeheartedly join in the priorities that President Trump.”

The apparent deterioration of the Trump-Sessions relationship follows the close partnership during the Republican Primary and the 2016 General Election. Sessions came out as the first U.S. Senator to endorse Trump and then served in an advisory capacity for his campaign until his victory.