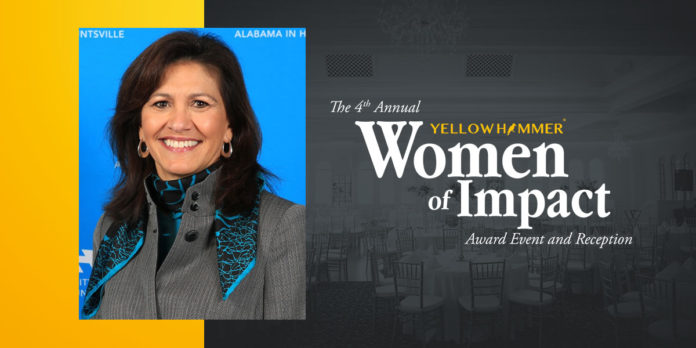 Founder, former CEO and chairperson of the board of Huntsville-based Analytical Services, Inc. (ASI), Irma Tuder is well regarded as a titan of industry.

Her rise to become one of Alabama’s most prestigious female business executives was preceded by her impressive academic background. Tuder, a native of El Paso, Texas, received a bachelor of business administration in accountancy from the University of Notre Dame and earned an MBA from Troy University in Montgomery.

The Certified Public Accountant also attended the Dartmouth College Minority Business Executive program and is a graduate of the Huntsville/Madison County and state of Alabama Leadership programs.

Her journey to the Yellowhammer State began when she met her husband and moved from the Lone Star State to the Rocket City. When considering the line of work she desired to partake in, she recalled interviewing with various nationally-renowned companies before eventually deciding to launch a company of her own. After she made this decision, as they say, the rest was history.

“I interviewed and the job offers didn’t sound very appealing to me, so I thought ‘Well, if I’m going try starting a company this is probably the time,'” says Tuder.

“Fortunately, it was one of those things that a lot of it is luck and opportunity and it worked out that we were able to make it happen,” she adds, further stating that her company grew from a handful of employees to nearly 400 employees by the time she sold the company.

ASI, thanks to her founding vision and strategic operational foresight, quickly became a nationally recognized company providing management and technical solutions to the federal government. In a city where there is certainly no shortage of premier industry competition, Tuder solidified her firm’s positioning as one of the most successful woman-owned companies in the Tennessee Valley.

Tuder recalls how the Huntsville community, the place she still calls home to this day, embraced her with open arms.

“I’ve been blessed beyond my expectations. Huntsville was a very welcoming community to me, because I didn’t know anyone here besides my husband, and it still is,” says Tuder. “It’s a very open community to people from other places for other people to come here and be able to thrive.”

Tuder holds over three decades of experience in strategic business planning and execution, executive leadership, financial management and business operations. Prior to launching ASI, she served five years as a controller in private industry and an additional five years in public accounting.

Tuder continues to utilize her exceptional business skills to this day as serves on numerous boards and committees, all of which have benefited greatly due to her extraordinary expertise and talent.

Presently, Tuder serves on the boards of directors at ServisFirst Bancshares, Inc. and ServisFirst Bank Board of Directors, where she chairs the audit committee and sits on the governance committee. The bank greatly benefits from her impressive background in accounting as she plays an integral role in the operational activities of the bank and ensuring compliance with banking standards.

She also sits on the board of directors for the HudsonAlpha Institute for Biotechnology, a non-profit institution supporting the biotech industry. Tuder serves the institute’s Navigate Program, where she mentors small companies on the campus of Hudson Alpha. In addition, Tuder assists the institute facilitate economic development initiatives to attract firms to its campus.

She is also a member of the Notre Dame Institute for Latino Studies Advisory Council, and the University of Alabama in Huntsville (UAH) Foundation Board and Business School Advisory Board.

Additionally, Tudor is a past-chairperson for the Huntsville/Madison County Chamber of Commerce Board of Directors, past-chair for the Alabama Science and Exhibit Commission and a past member of the University of Notre Dame Mendoza College Business Advisory Council.

Tuder tells Yellowhammer News that while, at times, she maintains a busy schedule, she enjoys every minute of it.

“I enjoy it, it keeps me engaged,” says Tuder, further stating that benefits personally for her experience in serving a diverse array of various organizational operations.

When asked about the Huntsville area, a community which has certainly been positively impacted by Tuder’s presence, she sees enormous potential for the city as well as the entirety of the Tennessee Valley as it continues to grow and diversify.

She noted the wide range of growing investment from both the public and private sectors in the thriving metropolitan area of Huntsville.

“Huntsville is growing tremendously,” she says. “I think we’re growing faster than we anticipated but it’s planned growth. What I love about it is that it’s diversifying, it’s no longer just dependent upon government dollars, the defense and NASA dollars. You’ve got a lot of the large companies now coming in,” said Tuder, going on to mention North Alabama’s robust biotech, automotive, space, technology and tourism industries.

In Tuder, Alabama is fortunate to have lured such an exceptional business talent and is truly blessed to have her among its ranks of talented business professionals who call the Yellowhammer State home. Tuder’s expertise and skills will no doubt hold a lasting impact on the many industries which have benefited from soliciting her wealth of knowledge in business.

Yellowhammer News is proud to name Irma Tuder a 2021 Woman of Impact.