Heidi Cruz to Alabama: ‘Ted and I will be spending a lot of time with y’all’ (Audio) 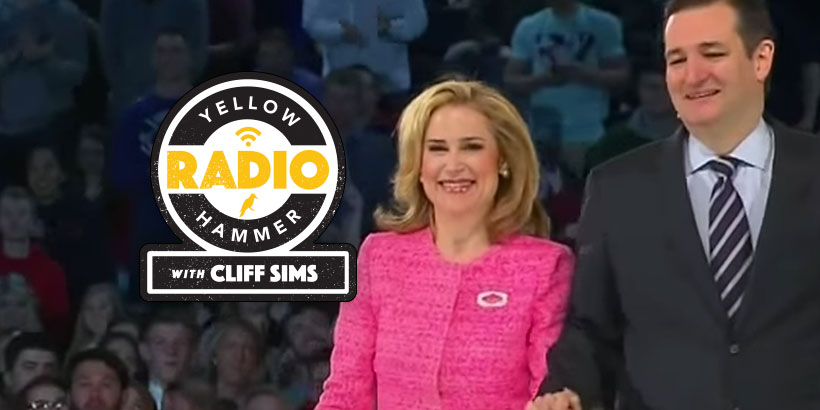 Heidi Cruz, the wife of U.S. senator and Republican presidential hopeful Ted Cruz, is touring the state of Alabama this week. In an interview on Yellowhammer Radio with Cliff Sims, Mrs. Cruz said her reason for spending significant time in the state over the next few days is that Alabama is playing an increased role in the presidential nominating process this election cycle.

“What brings me to the state is the importance that you all play in this election of the next leader of our great country,” she explained. “We are working hard in the South and all of the March 1 states. Alabama is an important part of that, so Ted and I will be spending a lot of time with y’all.”

Alabama will join Arkansas, Georgia, North Carolina, Tennessee, Texas, and Virginia in holding its primary elections on March 1st next year. This so called “SEC Primary” has made the South more influential in the GOP’s nominating process. As a result, numerous candidates have spent significant time in the Yellowhammer State already this year.

Heidi Cruz is a vegetarian with a Harvard M.B.A. who worked in the Bush White House and now serves as a senior executive at Goldman Sachs. Her extensive background in business and politics has clearly prepared her well to be the wife of one of the country’s most well-known politicians.

A few notable excerpts from Sims’ interview with Mrs. Cruz can be found below. The full interview can be heard in the video above.

(Editor’s note: the quotes below are lightly edited for brevity and clarity, but not for substance.)

On how she and Sen. Cruz met:

It was meant to be. We met about 15 years ago working on the George W. Bush campaign… Ted and I worked on that campaign together and spent a few years in Washington before moving back to Texas. So, we met in politics.

On what initially attracted her to Sen. Cruz:

Ted is compelling. If any of y’all have ever spent five minutes with him, you are drawn in… It’s interesting how the news media tries to portray him so different than he is in person. They’re scared of him. They’re scared that he’s effective… that he’s a conservative and that he can win. Ted is not afraid to share his beliefs… He is articulate.

On a personal level, Ted is incredibly thoughtful. He’s really fun… He has a wonderful sense of humor. He’s a big movie buff. He’s a great chess player. And outside of his very intense policy work… He’s really fun to be around. He’s also easy going. I don’t know that people know that about him.

On Sen. Cruz’s “audiographic memory” that allows him to remember and recall almost everything he hears:

Ted does have an incredible mind and he does have these files (in his mind) that he just pulls out. I think it is from his career as a litigator having to make the argument — having to go in front of courts of law and working both in the policy realm to defend our constitutional rights, as well as professionally… Cases that may not have ever been won, Ted has won in very close battles and it is because he is very, very good at eliminating all of the noise and focusing on the fundamental issue at hand: what produces results and what matters to real people.

On emptying their savings account and spending over $1 million to get him elected to the Senate:

It really wasn’t (a nerve-racking decision) for the following reasons: We were very prepared. The way we made that decision made good investment sense… I said to him that he should go out there and campaign and make his case to Texas why he should be their next U.S. Senator — why it mattered, why Ted Cruz was different… He did go make that case. We did not put a dollar in, we did not drain our bank account at the beginning. We made sure we had the support of Texans and that our funds would be the difference between winning and losing once he had already gathered those votes. So, knowing we had the capital to make the difference, and he had already earned the trust of Texans, it was an easy decision.

On what America could expect from First Lady Heidi Cruz:

My interests and passions in life have always been business, economics and entrepreneurship. When I was a six-year-old child my parents encouraged me to start a business… So at six and eight-years-old respectively my brother and I started a bread business. It taught us so much about organization and hard work. We made about 200 loaves a week, spent about 4 hours working each day after school. We had to manage our cash, buy supplies, change our prices and manage our margins. It was a great experience for about 12 years. That gave us not only some great tools, but a real sense of self-worth, a sense of independence and a sense that we could do it… I think the youth in our country need that message in their homes, in their schools and in their communities. So I would be very excited about spending time seeking to raise up those who are in failing schools who don’t have that influence — encouraging them with the value they add through entrepreneurship. Ted and I are also big advocates of school choice, and I think that is linked and related. Those are the issues I would focus on.

A schedule of Heidi Cruz’s public events in Alabama this week can be found below.