From Cadillac to Kevin Turner: Here are the individuals about to be members of the Alabama Sports Hall of Fame 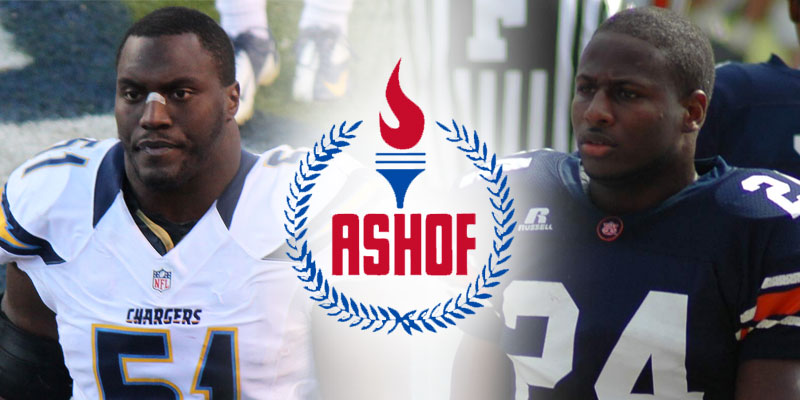 The Alabama Sports Hall of Fame class of 2017 is set to be inducted this weekend in Birmingham. The names of those going into the hall this year include Kevin Turner, Takeo Spikes, Carnell “Cadillac” Williams, Todd Jones, Lee DeFore, Ken Donahue, Jeff Herrod and Jim Goostree. This will mark the 49th induction ceremony for the ASHOF.

Kevin Turner was a captain on Alabama’s 1991 team before becoming a third-round selection in the 1992 NFL Draft. He played in the NFL for eight seasons. He passed away last March after a six-year battle with ALS. Once he was diagnosed, Turner took an active role in the research and development of data on the relationship between football injuries and CTE. His story was recently featured on HBO’s “Real Sports with Bryant Gumbel.”

Takeo Spikes played linebacker at Auburn in the mid-90s. He helped the Tigers win the SEC West in 1997 with his team-high 137 tackles that season. He was taken 13th overall by the Cincinnati Bengals in the 1998 NFL Draft, and he went on to play for 15 years. He was twice selected to the Pro-Bowl and twice named an All-Pro in the league. There was only one season in which he had less than 70 tackles.

If you have been a football fan in the state of Alabama for over a decade, you are probably familiar with Auburn announcer Rod Bramblett’s call of “Go Crazy, Cadillac!” during the scoring of an early touchdown in the 2003 Iron Bowl. Carnell “Cadillac” Williams played at Etowah High School before signing with Auburn. While in Auburn, he was an All-American, an All-SEC running back, and an All-SEC return specialist. He was part of the Tigers’ 2004 team that went undefeated and won the SEC Championship. Williams broke the all-time Auburn career records in two categories for most rushing attempts (with 741) and most touchdowns (with 45). He went on to play seven seasons in the NFL and as a rookie, became the first player in NFL history to have three consecutive 100-yard games.

Todd Jones led Jacksonville State to back-to-back College World Series appearances in 1988 and 1989. As a pitcher, he struck out 171 batters during those two seasons. He then went on to play for 16 seasons in Major League Baseball and for eight different teams. In May 2006, he became the Detroit Tigers’ all-time leader in saves with 235. He was the 21st member of the 300-Save Club and finished his career with 319 total saves. In 2006, he helped lead the Tigers as they won the American League Pennant.

Lee DeFore played college basketball at Auburn before heading toward a career in the NBA. He currently sits at fifth in all-time scoring average at Auburn, with an average 19.0 points per game. He led the SEC in scoring during his senior year at Auburn with an average of 23.7 points per game, as well as setting nine Auburn school records during his career and scoring over 30 points in seven games. In 21 of the 26 games, he led the team in scoring.

After playing defensive lineman at Tennessee, Ken Donahue went on to be a college football assistant coach for 38 years. He assisted at Alabama for 21 years, from 1964 through 1984, and he was named Working SEC Coach of the Year twice.

Jeff Herrod played college football at Ole Miss before pursuing a career in the NFL. He holds the Ole Miss records for tackles in a single game with 28 and tackles in a single season with 168. He completed his Ole Miss career with 528 tackles, which is the most in school history. He sits second all-time in the most tackles in SEC history. During his 11-year NFL career, he was named Defensive Player of the Year three times.

Jim Goostree worked as an athletic trainer at Alabama for 27 years. After he was promoted to assistant athletic director in 1984, Goostree supervised the renovation of Bryant-Denny Stadium, among other projects. He passed away in 1999.

In addition to the eight inductees, Pete Derzis and Dr. Gaylon McCollough will be recognized as the 2017 Distinguished Sportsmen of Alabama. Derzis is a Sr. Vice President for ESPN and has contributed to creating a number of sporting events in the state. He also served as associate athletic director at UAB in the 1970s. Dr.McCollough is a renowned facial plastic surgeon, and he was an Academic All-American center at Alabama under Bear Bryant. McCollough was on the 1964 Tide team that won the national championship.

Ron Ingram, a longtime high school reporter and the current director of communications for the Alabama High School Athletic Association, will receive the Mel Allen Media Award. This award goes to media members who have made lifetime contributions to sports in the state.

The Frank “Pig” House Award, which is awarded to someone who has performed outstanding service to sports in Alabama, will go to Emmanuel “Tubb” Bell IV. He has served as the head women’s basketball coach at Wenonah High School in Birmingham for the past 20 years.