Elizabeth ‘Bettsie’ Norton is a 2022 Woman of Impact 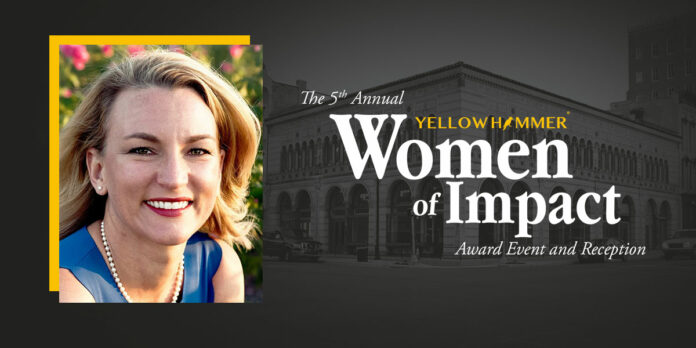 Alabama is fortunate to boast an incredible slate of business and community leaders who have chosen to make the Yellowhammer State their home. Elizabeth “Bettsie” Norton is certainly one of these talented individuals who contribute to the state’s success on a daily basis.

In the male-dominated field of manufacturing, Norton, a Louisiana native, has made her mark at one of Alabama’s most prominent aerospace companies.

As chief of staff and head of the Project Management Office at Airbus’ Mobile manufacturing site, Norton works alongside company leadership to ensure the coordination of vital business activities.

Prior to her current role, which she has served in since 2020, Norton was the executive project manager at Airbus Americas Engineering Center.

For Norton, who often finds herself as “the only skirt in the room,” effective communication is key for women in the field of manufacturing.

“Working with guys doesn’t phase me because that’s kind of what I grew up with,” said Norton. “Guys are very open and direct, right? They’re very open, honest and candid. It’s, ‘Show me the data.’ And that’s kind of how I am as well.

“So, I don’t find it odd being the only skirt in the room because I can hold my own and I’m proud of my ability to be one of the guys.”

Her ability to employ a woman’s communication style and perspective, Norton said, benefits her at the workplace.

“It really allows me to have two feet on different sides, but I can harness both skillsets,” she said. “I think because I’m able to communicate it in such a way that is not overly emotional but I can back it up with reason and logic.”

Understanding southern culture and being able to communicate to her colleagues, some of whom are from Germany, has proven successful in providing insight to others on how to collaborate with a diverse group of individuals.

Noting that “humor is transcendent a skill no matter where you come from,” Norton said she prides herself on “making people laugh and providing levity in any kind of situation.”

“I’m half German and half Cajun-French. So, the German part of me is very structured … But the Cajun-French part of me likes to have a fun time while doing it,” she said. “I don’t mind being the heavy, but I can do it in a kind of laid back, jovial kind of manner.”

Alongside her incredible career achievements, Norton holds a stellar educational background, which she asserted assists her in her professional life.

“Having the ability to impact a multitude of people in a positive way I think is one of the noblest thing that a person can do,” said Norton. “So the marriage of political science and, especially, public policy, was that beautiful amalgamation of understanding the system and the structure, and how the sausage gets made.”

Describing herself as “an economic development nerd,” Norton, who has a background in the field, is excited about Alabama’s growth outlook.

“At the end of the day, we all want to make Alabama a better place, right? So let’s figure out how to do it together,” she said. “I don’t think that Alabama has ever been better suited and better primed for exponential growth than where we are now. And it’s so exciting.

“It’s this grassroots effort and we’re just now at the beginning stages of something really exciting. And it’s so cool that I get to be here and present and part of the effort to really catapult the state. It’s coming together and it’s really exciting to witness.”

Should Lockheed Martin be awarded a potential Department of Defense contract for the Air Force’s KC-Y Tanker Program, of which Airbus would serve as a partner, Norton said the economic impact would be “transformative” for the state.

“We have the potential to take our 1,500 employees right now and reach 3,000. So whenever you do the economic multiplier effect, it’s going to be huge and literally transformative — not just for Mobile, the Gulf Coast — but really for Alabama,” she said. “I pinch myself every day because I’m like, ‘Holy smokes. I’ve got a front row seat to it.'”

A wife and working mother of two young children, Norton “doesn’t sit still much.” All while managing the daily grind of life, she still manages to involve herself in the community.

Norton has been in the following organizations:

When Norton sees an issue, she moves to solve it herself.

“I care. I’ve got a real big heart. I think that whenever you care about stuff, it’s only right to get involved,” she said. “To want to have a say in making sure that it’s managed well and that things get executed correctly.

“It’s important, especially if you want your community to be better and you want to change things, you have to get involved.”

Norton and her family have been Alabama residents for four years. Saying, “once you get here, you fall in love with it,” she noted Alabamians tend to have “an authentic love” for their home state — something which Norton said she has also developed living in Fairhope.

“I’m raising two little boys here, and there’s nowhere else that I’d want to raise them,” she said. “From an outsider’s perspective, it doesn’t get any better.”

Alabama is beyond fortunate to have stolen such a passionate and talented professional in Norton from Louisiana. Committed to ensuring the state is a better place to live than when she found it, Norton’s impact on Alabama has only just begun.

Yellowhammer News is proud to name Elizabeth “Bettsie” Norton a 2022 Woman of Impact.