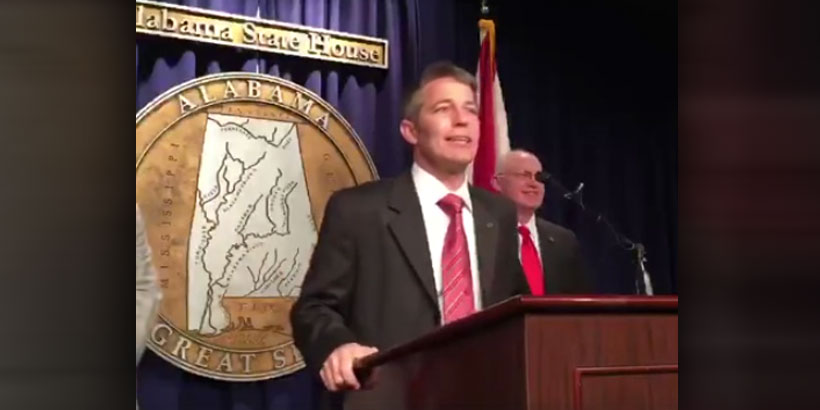 MONTGOMERY, Ala. — At 12:30 p.m. on Tuesday, Alabama lawmakers took the first steps in the process to impeach scandal-plagued Governor Robert Bentley (R-AL).

At a press conference called by Rep. Ed Henry (R-Hartselle), he and House Minority Leader Rep. Craig Ford (D-Gadsden) discussed the bi-partisan articles of impeachment they plan to bring against the governor.

“The process starts today,” Henry said. The Hartselle Republican stated that the articles of impeachment center around the governor’s “betrayal of the public trust.”

“His actions and lies have caused us to doubt his leadership,” he added.

Bentley’s “betrayal of the public trust” began, according to Henry, with his deceitful attempt to raise taxes in the 2015 legislative session that violated a clear campaign promise and continued with his affair with political advisor Rebekah Mason.

Citing comments from former ALEA head Spencer Collier, Henry insisted that it was hard to believe that the governor did not use his office to cover up his activities with Mrs. Mason.

However, Henry and several others insisted, that the articles were brought because of the lack of competence, not the presence of criminality.

“Waiting on a criminal investigation would be passing the buck,” Henry said.

While Henry was pleased that Bentley offered up his apology and said he has sought reconciliation with God, he insisted that his actions still have consequences.

“If he really loves Alabama, he should put aside his selfishness and step down,” Henry said.

House Minority Leader Craig Ford (D-Gadsden) said that it was a sad day in the state and insisted that this action was not partisan.

“This is not about Democrats and Republicans; it’s about right and wrong,” Ford said.

Ford, more so than the others at the press conference, was interested in the potential for obstruction of justice by the governor, specifically in regard to the allegations made by Alabama’s former top cop Spencer Collier. Collier alleged that Bentley told him not to cooperate with an investigation from the attorney general’s office. Ford believed this alone was probable cause to ask the senate to try the governor.

Rep. Mike Ball (R-Madison) called the situation a “crisis of confidence that needs to be resolved.” He noted that because Alabama lacks a recall mechanism, the legislature must protect the balance of power between the branches by holding the governor accountable for his actions.

A longtime supporter of Bentley, Rep. Standridge (R-Blount County), has publicly asked for the governor to step down before and now supports the articles brought by Rep. Henry.

“I have supported the governor for election twice, so it is sad,” he said. Blount County had the highest support for Bentley in his 2014 reelection but Standridge insisted that “officials need to be held to a higher standard.”

Henry stated that he has the votes to pass the articles but does not have the votes right now to get it to the floor. To even proceed with a vote on the resolution, Henry will need to gain a four-fifths majority that he hopes to have soon.

In response to the threat of impeachment, Governor Bentley released a statement calling it “a political attack.”

There are no grounds for impeachment, and I will vigorously defend myself and my administration from this political attack,” he said. “Today’s press conference is nothing more than political grandstanding intended to grab headlines and take the focus away from the important issues the Legislature still has to address before the end of the session.”

The articles of impeachment, which function as the charges against the accused, must be passed by a simple majority in the Alabama House of Representatives. Once the house impeaches the governor, he stands trial before the Alabama Senate in a trial presided over by the Chief Justice of the State Supreme Court.

If the governor is convicted, he would be removed from office and replaced by the current Lieutenant Governor, Kay Ivey.

This story will be updated as more information becomes available.