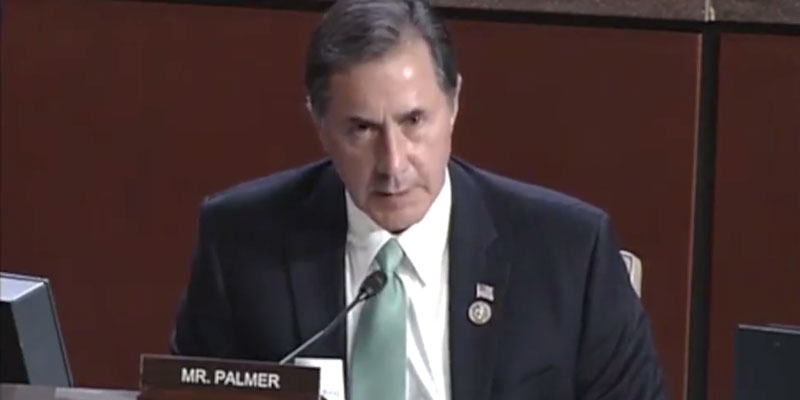 At the end of last week, Alabama Congressman Gary Palmer was part of a subcommittee hearing concerning the critical roles played by canines in the protection of our country, especially in our airports and transportation hubs.

Wired ran a story documenting the remarkable effectiveness of K9’s in bomb detection and other security measures and Congressman Palmer obviously agrees with the usefulness of these capable dogs. That’s why he wanted to know why more dogs aren’t being used to protect transportation hubs—especially American-sourced canines—and why TSA hasn’t fulfilled all of its current contracts with U.S. canine vendors.

Specifically, he first asked Ms. Harvey about the prevalence of canines employed by TSA. She replied that the agency has over 800 dogs in use at airports around the country. When Mr. Palmer pointed out that there’s still not a constant presence of these canine units, citing their absence in his own travels in large airports like Washington’s Reagan National, Ms. Harvey concurred.

Next, he asked her if TSA is “adequately funded for your canine unit?” She said they received funding for 50 additional dog teams in 2017, that those teams are currently being trained, and that this brings their total to 1,047 K9 teams nationwide, including the 800 presently on duty at airports.

Congressman Palmer then asked Mr. Harvey where TSA procures their dogs, she said from a variety of sources, mostly the same ones used by the Department of Defense. When he asked if any of these sources include American dog providers she said TSA has “a couple of agreements with domestic vendors” but when he asked her to name them she was unable to do so.

In reply, Congressman Palmer pressed Ms. Harvey with a more specific question. “Do you not have an adequate supply of American-sourced dogs?” Her reply was indirect. She said TSA is “working very closely with domestic vendors to build up that supply, but we have not identified a large enough supply domestically to do that.”

At that point, Rep. Palmer asked another direct question. “Have you fulfilled the contracts that you have with American companies? “Again, Ms. Harvey seemed to evade his question, repeating, “We’re working very closely with the vendors we have…” That’s when he stated, “The answer is no. You haven’t fulfilled all your contracts, and that’s part of what bothers me. We don’t have the security that I think is necessary at our airports…and there are contracts out there for (American) dogs that you haven’t fulfilled.” Ms. Harvey told Congressman Palmer she would check into this matter.

Below is the video of Mr. Palmer’s discussion with Ms. Harvey in this hearing.