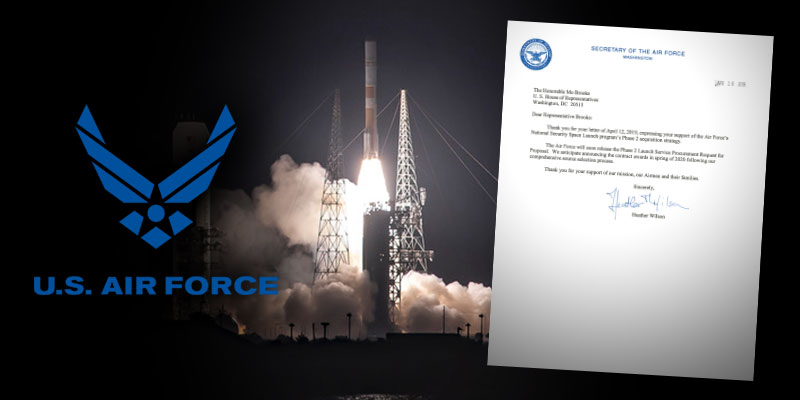 Yellowhammer News reported last week that Wilson responded to Brooks and his request that the Air Force proceed as planned with Phase 2 launch provider acquisition. In her reply, as well as in a separate response to House Armed Services Chairman Adam Smith, Wilson indicated the Air Force would proceed in the manner called for by Brooks.

Then, the Air Force released a request for proposal Friday afternoon, maintaining their planned acquisition strategy despite pressure to delay the acquisition process and award more than two providers with contracts.

Brooks lauded this decision, saying, “America must have reliable, assured access to space. National security depends heavily on it, as space-based assets are an integral part of most of our communications and weapons systems.”

“The Air Force will conduct a robust and competitive National Security Space Launch Program’s Phase 2 acquisition selection process open to all U.S. launch providers. It is critical that the process remain on schedule,” he advised.

Brooks concluded, “If launch provider acquisition is delayed, America cannot reliably launch space-based assets on time, reducing our operational readiness. I’m glad the Air Force has chosen to stay the course and do the right thing for America despite pressure to delay the process and allow additional launch providers.”