Brigadier General Tara D. McKennie is a 2021 Woman of Impact 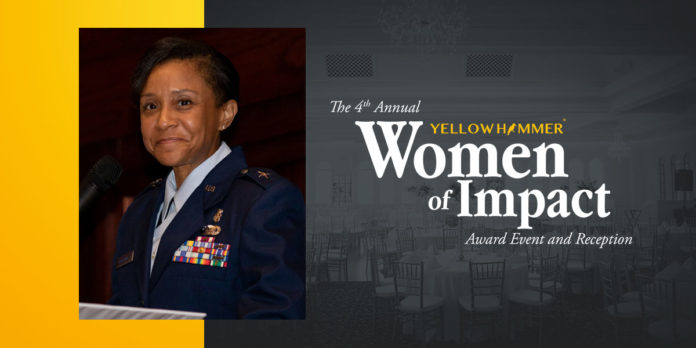 “I’m not the first person to deserve this, just the first to be recognized. I’m so amazingly proud to be the first woman and black woman,” said Brigadier General Tara D. McKennie when asked about her promotion to brigadier general in the Alabama Air National Guard.

McKennie “never thought for one second” that this was in her reach. As a hard, dedicated worker, she kept her head down and did her job well, constantly seeking ways to grow and learn from those around her.

“I just did my work and was intentional about reading and learning how women behave in the workplace,” she outlines.

In two male-dominated industries, McKennie grabbed ahold of what was in front of her and saw it as an opportunity rather than a set-back.

“I was intentional about having male mentors. Not to climb the ladder but to become as comfortable as I could be showing up to work,” McKennie says.

She credits much of the lessons she’s learned to her mentors and now takes every opportunity she can to impart key pieces of wisdom to women coming after her.

One of her greatest pieces of advice to women is to “raise their hand.” She says “don’t wait to be tapped.” McKennie lives this out as a bold woman of initiative. Although humble in her approach, she isn’t afraid to step in where she sees a need. And with each of those steps, she now finds herself serving as chief of staff of the Alabama Air National Guard; immersing herself in the expertise required to fulfill the role’s responsibilities such as overseeing the guard’s Romanian allyship and advocating for the airman relying on them.

McKennie is a hero to many in her civilian role as well. As a focused leader, she says, “I believe that one of the most important things we can do in life, especially as leaders, is to help others. I feel that my greatest impact and contribution is not the work that I do, but what I can pour into people who will hopefully overflow and be a blessing to others.” And that’s exactly what she’s doing with Radiology Partners, developing leadership development curriculum for physicians.

Although McKennie enlisted in the Air Force in 1989, she transferred to the Air National Guard in 2002 and has been serving in the 187th Medical Group since 2015. She is a Chicago native and holds Bachelor of Science degrees in both Radiologic Science and Healthcare Management from Southern Illinois University. McKennie also received a Master of Business Administration degree from Bellarmine University and a Master of Strategic Studies degree from Air War College. Additionally, this year she was awarded and recognized by industry publication, Fierce Healthcare, as one of 2021’s 10 “Most Influential Minority Executives in Healthcare.”

McKennie’s successes have been marked by humility. She says, “I would encourage people to never forget that in order to lead, you must know how to follow.”

She explains further, “Some of the most important and rewarding work I’ve done in my career has been from the rear in a supporting role. In the military we refer to this role as the Wingman. The traditional military definition of a ‘Wingman’ refers to the pattern in which fighter jets fly. There is always a lead aircraft and another that flies off the right wing of and behind the lead. This second pilot is called the ‘Wingman’ because she primarily protects the lead by watching his back. The wingman, while primarily a follower, must be ready to pick up the leadership role in a split second due to the loss of the flight lead or if the wingman’s situational or environmental awareness is higher than that of the leader. Following requires a great deal of skill and humility that many people underestimate and undervalue.”

Now, the wingwoman, Brigadier General Tara D. McKennie, has become the lead and is paving the way for other women to be recognized for the incredible work they have always been doing – off the right wing.