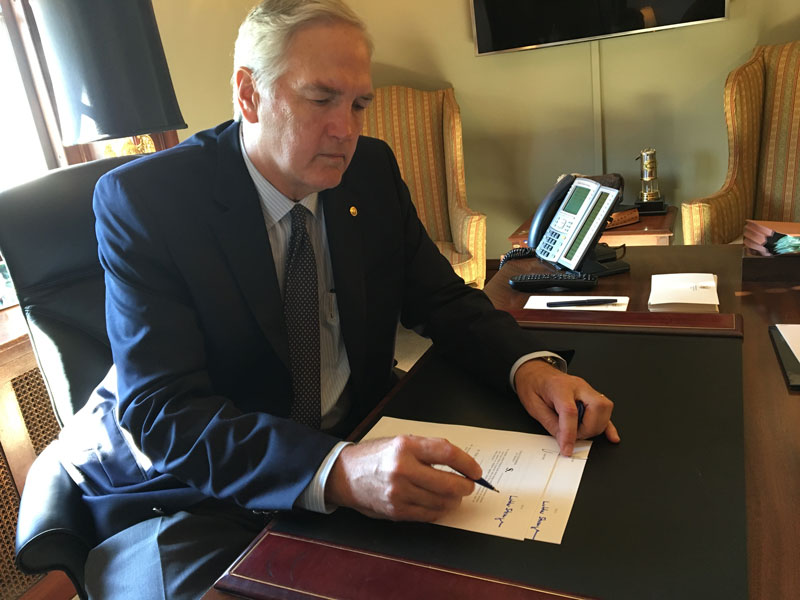 Across the nation, the Trump Administration has led a crackdown against so-called “sanctuary cities.”  While U.S. Attorney General Jeff Sessions has threatened to pull funding from governments that harbor illegal immigrants, Senator Luther Strange is going a step further.

Yellowhammer News learned today that the Senator’s filed a new bill entitled the Securing the Border and Protecting Our Communities Act. This measure would block some federal transportation grants to sanctuary cities when those cities refuse to uphold federal immigration laws. The bill also proposes cutting funds to cities or states that penalize local businesses for bidding to work on the border wall.

Senator Strange filed the bill along with Senator David Perdue (R-GA), and it also directs that the funds cut from these sanctuary cities will be used to fund the wall the President is moving to construct on the country’s Southern border

Senator Strange explained the importance of this legislation:

“The American people spoke out loud and clear last year in support of one of President Trump’s most important promises – to finish building the wall on our Southern border. I introduced this bill to make it clear that cities do not get to play games with the safety of their people or ignore clear federal statutes. They can either follow the law or fund the wall.”

“Sanctuary cities continue to put politics over safety and security. In their latest attempt at political grandstanding, sanctuary cities are threatening to penalize their own taxpaying local businesses if they submit plans to help enhance our border security with a wall. Our nation is a nation of laws. Until these cities join the rest of us in following these laws, they have no business receiving federal grant funds.”

This bill sends a clear message to states like California, New York, and Rhode Island who’ve moved to keep their states from awarding contracts to companies bidding on construction of the wall. The city of Berkley, California has created a “black list” to cut funds to companies that want to assist with the wall, so this measure will also directly address those actions.

In November, President Trump’s victory was based in significant measure on his promise secure our borders. Since then, he’s signed an executive order laying the groundwork for the wall.