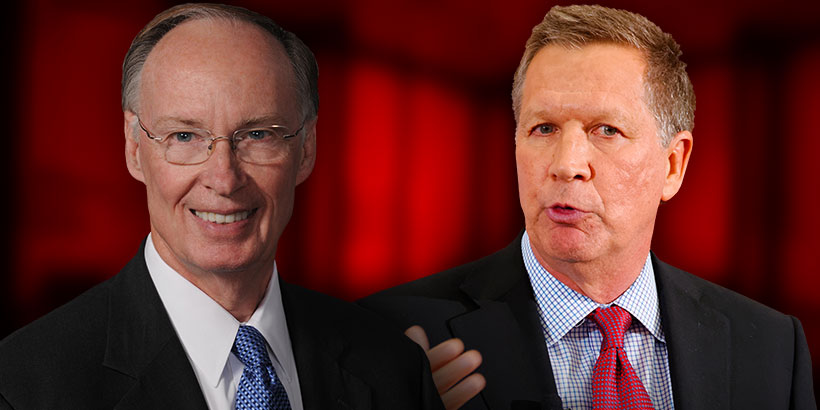 According to a report from the Washington Post, Bentley reached out to Kasich after the first GOP Debate in Cleveland.

“John Kasich’s success in putting conservative ideas to work in Ohio—cutting taxes $5 billion, turning an $8 billion shortfall into a $2 billion surplus, and creating 350,000 new jobs—are all strengths he will have as President,” said Bentley. “Coupled with John Kasich’s compassion for the people he serves and desire to make their lives better, our country will be stronger with him as President. Governors are best suited to lead our country because they have experience running a state.

With his record as governor and his two decades on the House Armed Services Committee working with leaders like President Reagan to strengthen our military, end the Cold War and revamp the Pentagon, John Kasich is a leader whose readiness to lead our nation on his first day in the Oval Office is unmatched. America needs John Kasich, and I am going to do everything I can to help make sure he is our next President.”

This endorsement is a departure from 2012, when Gov. Bentley openly backed, but did not endorse, the very socially conservative Rick Santorum, who eventually won Alabama in the primary.

As Governor of Ohio, Kasich has had a relatively less conservative record than many of his Republican peers.

Kasich is one of the only Republican governors in the country who has expanded Medicaid under ObamaCare, and this move may add further fuel to the rumors that Governor Bentley is also considering ways to expand the program.

Bentley and Kasich also handled the Supreme Court’s decision on same sex marriage similarly, essentially telling their constituents that it’s time to move on, and both ran into opposition from their state legislatures for proposing tax increases.

Kasich has garnered early support from the more establishment wing of the GOP, who like his pragmatism and vast governing experience both as a member of Congress and as Governor of Ohio.

“I’m humbled by Governor Bentley’s support,” said Kasich. “The endorsement of a fellow governor is special, especially from someone like Governor Bentley who brings so much to his work and who has such an incredible record of service to his state and our country.

What’s also significant to me is that Gov. Bentley reached out to our campaign, unsolicited, to offer his support. This is about our shared commitment to putting conservative principles to work to get America back on track. I’m very appreciative of his endorsement and I’m very excited about what we’re going to be able to do together to move the campaign forward in Alabama, the South and across the nation.”