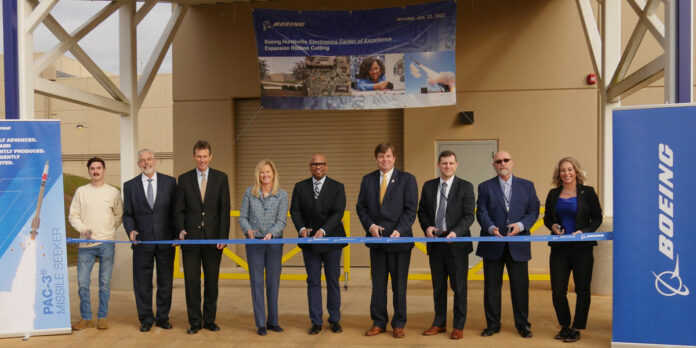 Calling it a “microcosm of the larger Boeing enterprise,” the space and defense giant cut the ribbon Monday on an addition to its Huntsville Electronic Center of Excellence.

The 9,000 square-foot addition will help the company continue to produce vital hardware.

“In many ways this electronic center is a microcosm of the larger Boeing enterprise, enabling systems that support today’s most important missions,” said Kay Sears, vice president and general manager of Space, Intelligence & Weapon Systems for Boeing Defense, Space & Security. “Since its opening in 2018, this center has produced tens of thousands of circuit cards – Essential hardware that connects some of the smallest electronics into some of the largest and most powerful weapons systems with the highest standard of precision, quality, and reliability.

“This expansion is an example of how Boeing is prioritizing our investments in facilities and adding state-of-the art capability like automated inspection and robotic soldering equipment.”

The facility has also helped in the development of defense and space projects, Sears said.

“It supports our Patriot Advanced Capability, or PAC-3 Missile Seeker, which is critical in protecting our soldiers and allies worldwide against tactical and cruise missiles and hostile aircraft,” she said. “It supports the Minuteman Intercontinental Ballistic Missile Weapons System, the nation’s trusted and enduring land-based strategic deterrent.”

“This center also supports the space launch system, which just launched the first human rated spacecraft to the moon in almost 50 years. It supports the international space station which will carry out cutting edge research and enable the future of deep space exploration.”

U.S. Rep. Dale Strong (R-Monrovia) saluted the company and its legacy as a defense contractor – nationally and internationally.

“Boeing understands what is before us,” he said. The congressman said he recently met with an Israeli delegation and talked defense issues and the Patriot.

“PAC, Patriot saved their country,” Strong said. “So that’s what you’re a part of here at Boeing.

Austen Shipley is a staff writer for Yellowhammer News.