A message from Alabama Realtors
December 11, 2020 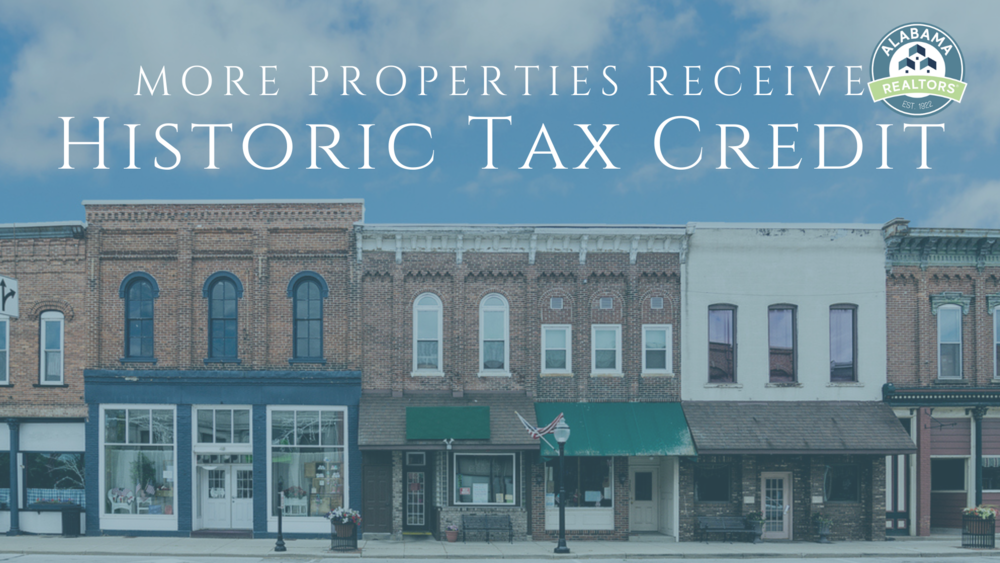 Renewed by the Alabama Legislature in 2017, the Historic Tax Credit is a set-aside of $100 million in tax credits spread over five years (2018-2022) for the rehabilitation of historic properties throughout the state. The tax credit is split between urban and rural counties, with $60 million to urban counties and $40 million to rural counties.

“This tax credit helps breathe new life into once vibrant, historic locations that are now in various states of disrepair,” says Jeremy Walker, Alabama Realtors® chief executive officer. “The impact of this tax credit can be seen across the state with the revitalization of historic structures and entire sections of downtowns.”

The tax credit is overseen by the Historic Tax Credit Committee, composed of legislators and several heads of state government agencies and aided by the Alabama Historical Commission. The committee meets quarterly to approve and grade project applications. This year, the committee has met three times, approving original and supplemental requests for 20 projects, 10 urban and 10 rural, and is scheduled to meet again in December to consider additional applications.

The map below shows every location that has taken advantage of the tax credit to date:

As mentioned above, the Historic Tax Credit program has benefited both rural and urban counties.

The committee approved 10 rural projects so far in 2020. The buildings, locations and amounts are listed in the chart below and in the map above. These 10 projects include one supplemental request from an existing project and are allocated tax credits in 2020 and 2021.

Since 2018, the beginning of the program, 24 rural applications have been approved to receive the Historic Tax Credit, although three rural projects have had their approvals rescinded. With two rescinded projects receiving approval upon re-application (Old Baptist Hospital and Pratt Continental Gin) and one project receiving approval for a supplemental request, a total of 20 rural projects are currently receiving tax credits. Of these, one rural project, Womack’s Theater in Monroeville, was completed but approved for supplemental credits, while the other 19 are in various stages.

From a monetary standpoint, the 20 rural projects have received or will receive just over $16.5 million in the Historic Tax Credits for rural Alabama. But almost $9.7 million from the 2018 and 2019 rural allocation was left on the table. Under the Historic Tax Credit bill, any rural funds remaining unallocated after a set amount of time reverts to the urban portion. This means that the $9.7 million has gone to urban projects.

The committee has approved 10 urban projects, including two supplemental requests from existing projects, in 2020. The buildings, locations and amounts approved are detailed below, and all 10 project allocations are on the waitlist.

Since 2018, the committee has approved 75 urban applications, two of which are the supplemental requests approved this year. Fifty-four of these projects received or will receive an allocation from the 2018-2022 urban funds, while the other 21 urban projects are on the waitlist in case the rural portion remains unused or future funding is allocated by the Alabama Legislature. Eight urban projects have already been completed, and two completed projects are included on the waitlist, awaiting supplemental credits.

Alabama REALTORS® is the largest statewide organization of real estate professionals and the official advocate of Alabama’s multifaceted real estate industry. Subscribe to our newsletter and stay up to date on real estate news in Alabama.