The Yellowhammer Multimedia Executive Board has written prior about the need for a change in leadership at the BCA and outlined some of the issues facing the group. Now, in addition to announcing the company’s withdrawal, Crosswhite’s letter serves as an instructive record as to how exactly Alabama’s business community has reached this point of fracture. 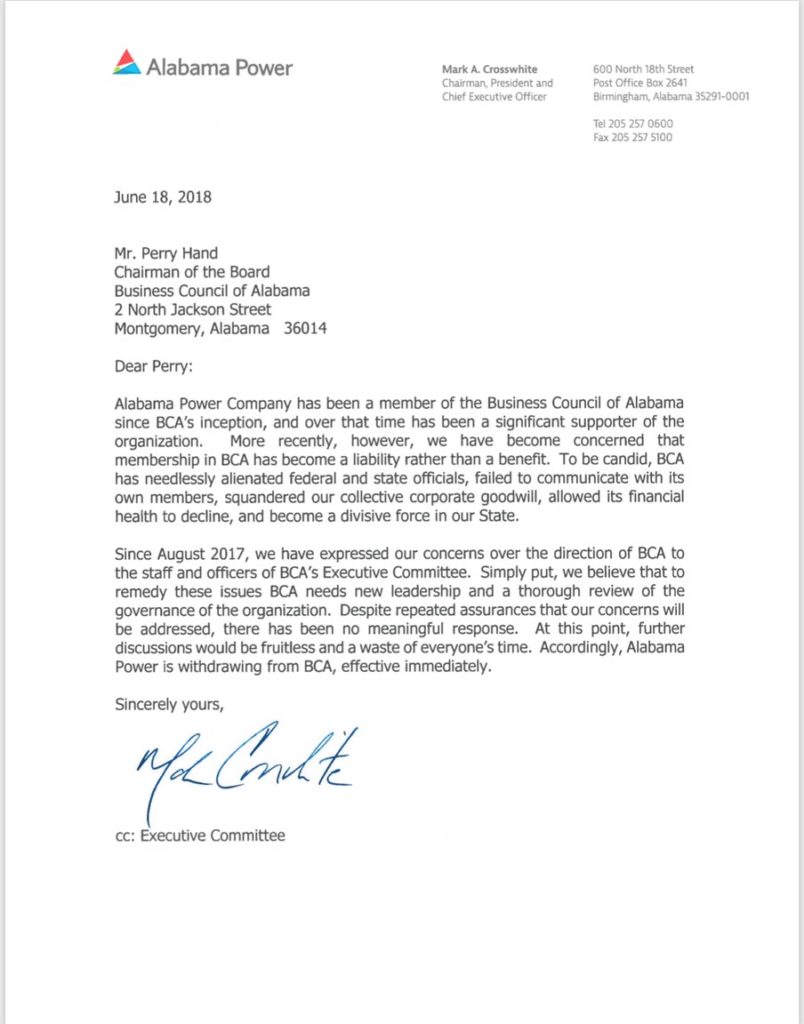 Most of the state’s largest employers have been members of the BCA since its inception, having played a role in its creation. At the time, the mindset of manufacturers and other related industries from across the country and around the world had begun to change. And so these Alabama business leaders recognized that opportunities existed for Alabama under a single, cohesive voice for jobs and economic development.

Thus, the BCA was formed. No longer were jobs anchored to the northeast or foreign countries. The BCA stood out in Alabama as an advocate for the types of policies that created an economic climate favorable to industrial recruitment and job retention.

The BCA fought for lower taxes, preservation of our right-to-work status and a law-abiding appellate court system. These were the successes of the 1990s and early 2000s.

Then BCA participated heavily in the Republican takeover of the Alabama Legislature. The years following should have been the high water mark for the organization. It had seemingly set itself up for sustained success based on the potential number of relationships awaiting it.

Instead, something else happened. The depth and breadth of its relationships contracted rather than expanded. The implementation of its agenda became about settling personal scores. Its internal focus moved away from the basic functions of advocacy.

As a result, weaknesses began to show, and BCA ultimately arrived at the place described by Crosswhite in his frank assessment of the organization’s standing. During the last Republican caucus election for Speaker of the House, according to several members who were in attendance, one of the baseline questions to candidates involved whether they would be willing to stand up to BCA. That is a truly remarkable demonstration of how far the BCA brand has fallen.

The BCA’s federal influence has diminished, too. Its leadership is no longer welcome in the offices of those at the highest level of Alabama’s delegation. Given where these things stand, it is easy to see why Crosswhite describes BCA as “divisive” and how membership has become “a liability rather than a benefit.”

So much opportunity exists, once again, for our state. With Trump’s tax and regulatory policies pushing our economy into high gear, Alabama is poised to reap the rewards. The business community quickly finding new leadership – whether under its existing structure or something new – is essential to its success.