Ala. leads ‘SEC Primary’ to make the South a major player in the presidential race 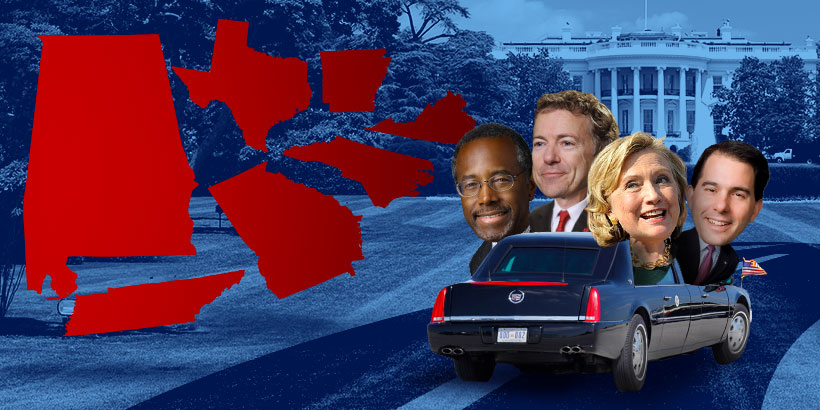 (Video Above: SECPrimary.com’s hype video for the upcoming presidential primary)
MONTGOMERY, Ala. — After Alabama passed its bill moving primaries up to March 1st last week, joining Arkansas and four other Southern states, the “SEC Primary,” appears to be ready to make waves during the 2016 presidential race.

The Yellowhammer State will join Arkansas, Georgia, North Carolina, Tennessee, Texas, and Virginia to hold its presidential primary election on March 1st as soon as Governor Robert Bentley (R-AL) signs the bill into law. Electoral heavy hitter Florida will also have its primary in March, waiting until two weeks after its neighbors for March 15th.

The SEC Primary, championed by Alabama’s Secretary of State John Merrill, is an effort to maneuver Alabama into a place of relevance in the nominating process.

But in an effort to condense the primary campaign calendar, both national party committees passed a rule cutting in half the number of delegates a state could send to the party convention if they held their primary before the first Tuesday in March.

So in 2011, the Republican-controlled Alabama Legislature passed a bill moving the presidential-year primaries to the second Tuesday in March alongside Mississippi. As a result, several candidates visited the state and the ALGOP was able to host a presidential forum featuring Rick Santorum — who eventually won the Alabama primary — and Newt Gingrich. However, the frontrunner, Mitt Romney, only dropped into the state to hold a high-dollar fundraiser and didn’t actively campaign, ceding Alabama to more conservative candidates without much concern because of its limited importance.

The SEC Primary plan will likely make Alabama and other Southern states much more influential in picking the party’s nominee.

Sen. Quinton Ross (D-Montgomery), who sponsored the bill in the Alabama Senate, called his bill an “economic stimulus,” because it would encourage presidential candidates, and their massive cadres of campaign staff, to spend more time in the state.

The plan is being viewed as good news for conservatives, who believe the GOP needs to stop nominating candidates they consider too moderate, but is concerning for some in the more establishment wing of the Party who fear that a Southern Super Tuesday could pull the eventual nominee to the right and damage them in the general election.

A website for the SEC Primary is expected to launch Monday afternoon.