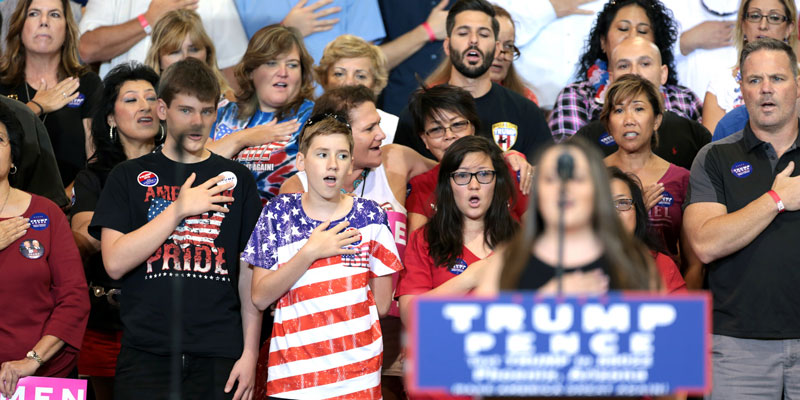 1. President Donald Trump is on the campaign trail again, as if he ever stopped

— While Trump was campaigning for Congresswoman Marsha Blackburn, she spoke for 45 seconds, and he had no idea who her opponent is.

— He continues to hammer national themes including taxes, immigration, the military, McCain, Schumer, and Pelosi.

2. Roseanne loses her job for a racist tweet, everyone forgets where they stood last week

— In less than 12 hours, the Roseanne reboot is dead, reruns are yanked off the air, and it’s all because she ignorantly compared Valarie to an ape.

— Conservatives who felt the NFL was justified in punishing kneeling players, and liberals who felt that was a free-speech issue, have now switched sides.

3. The Alabama Republican Party is really ready to let a lunatic represent them on the ballot

— Completely insane Jim Bonner has decided he will take his ill-gotten name ID and really stupid statements all the way to June 5th, hoping no one notices.

— The Alabama Republican Party COULD stop him dead in his track for a dozen reasons, they have done it before, but it appears they will not; however, they did censure him.

— The “artist” struck earlier this year as well and the billboard he vandalized had profanity put on it this time.

— Florence police believe this could be a hate crime, but I don’t think that is true. The billboard is down.

5. Clinton controversy still looms as IG report is due soon

— The Senate will be looking at this report according to Senate Judiciary Chairman Chuck Grassley, R-Iowa. The hearing will be about “Examining the Inspector General’s First Report on Justice Department Decisions Regarding the 2016 Presidential Election”.

6. Another big investment in Alabama, $388 million dollars from Hyundai

— Economic investment from the auto industry is nothing new in Alabama, but the plans are to construct a plant dedicated to manufacturing engine heads.

— This investment will create 50 jobs in Montgomery and also tell incoming business that Alabama’s auto industry is still growing.

— Saying the “the last few months have been incredibly difficult”, the governor decided to walk away even though he was cleared of the felony charge.

— Concerns that Greitens will “burn it all down” seem to be unfounded.