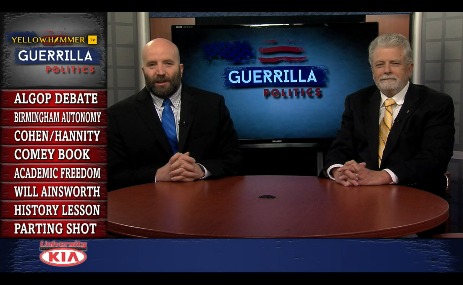 — Did any of Gov. Kay Ivey’s challengers damage her in the latest GOP Gubernatorial debate?

— Can Birmingham actually block legislation from the state legislature over perceived racial issues?

— Is this the week they FINALLY nail Donald Trump? (SPOILER: No)

State Representative Will Ainsworth joins Jackson and Burke to discuss the his candidacy for Lieutenant Governor and his controversial bill that would allow trained teachers to carry in Alabama schools.

Jackson closes the show with a “Parting Shot” directed at Democrats who keep talking about Roy Moore after GOP voters rejected him.