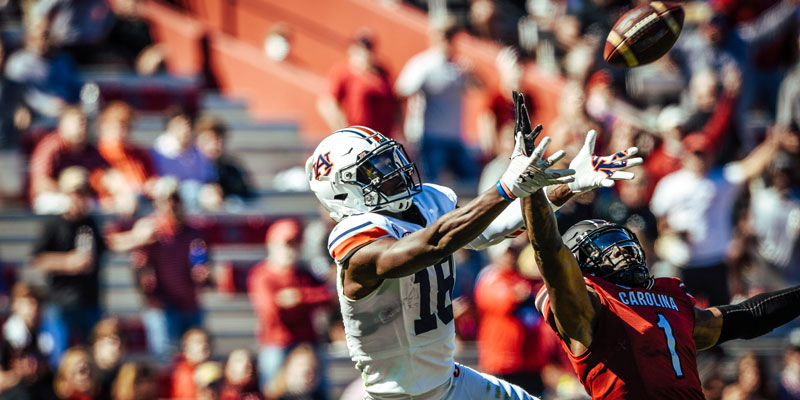 Auburn scored nine points in its first two possessions versus South Carolina. On those two drives, the Tigers amassed 138 yards and were effective running and passing the football. Conversely, the South Carolina Gamecocks had a grand total of negative 12 yards and two punts after their first two offensive possessions. Midway through the first quarter, it appeared Auburn would win this game going away.

Then on Auburn’s third drive of the game, quarterback Bo Nix threw the first of his three interceptions on the day. That play gave South Carolina a short field of only 29 yards and the break they needed to get into the game. Auburn’s first turnover of the day is not where they lost the game, but it is where the game became a real contest.

Over the next three quarters, South Carolina found answers and made plays, while Auburn was often frustrated and confounded. Today we look at three numbers, two notes and one quote that provide a closer look into Auburn’s 30-22 loss at South Carolina.

3
Auburn turned the ball over three times against South Carolina. There are many things that go into wins and losses, but giving the ball way multiple times (especially in your own territory) is the most surefire way to lose. Once again, it is more complicated than just turnovers, but Auburn has a negative turnover margin in two games and has lost them both.

Some teams are great enough overall or explosive enough on offense to overcome a few turnovers, but Auburn is not one of those groups right now. If the Tigers are going to win over their last six games this season, they must protect the football.

For Auburn to win more games, the Tigers’ offense must score touchdowns more regularly when getting near the goalline. On the other side of the ball, the Auburn defense has allowed nine touchdowns in 12 redzone attempts over the last three games combined. Both units must improve in this critical area to win football games in the SEC.

13
Auburn linebacker Zakoby McClain was all over the field against the Gamecocks and finished the game with 13 tackles. McClain didn’t have a perfect performance, but he was certainly a bright spot for the Tigers in a disappointing loss. The Auburn linebacker may start a given play aligned in different spots, but when the whistle blows at the end of a down McClain is always in the same place — tackling the ball carrier or very nearby.

McClain, who exhibits determination, athleticism and aggression every game, now has three consecutive games with at least 10 tackles.

Clock management
Auburn’s offense has been a mess at the end of each of the last two games. The Tigers were fortunate that last week’s intentional grounding/backward spike fiasco did not cost them the game. Even before the penalty, it is a fair question to ask why the offense was spiking the ball with 28 seconds left if they intended to kick the field goal. Wouldn’t it have made more sense to let the clock run down and spike the ball with only a few seconds left so that Arkansas would not have an opportunity to get the ball back?

Similarly, Auburn’s final drive with the Tigers trailing by eight points against the Gamecocks ended with quarterback Bo Nix being tackled short of the first down marker as time expired. There are a number of things on the last possession that could have been done better, but the key mistake was failing to throw the ball into the endzone on the last play. Nix must give his receivers a chance to make a play as it was clear he was not going to be able to rush for a touchdown.

Auburn is not a team capable of blowing out many of the opponents on its schedule, so it is vital that the Tigers’ offense improve in late game and high leverage spots moving forward.

Auburn opened up the game against South Carolina with a clear strategy of spreading the ball around to Tiger backs and receivers on quick throws, screens and off of run/pass option. Bo Nix completed passes to seven different receivers in the first quarter alone. Everything seemed to be going smoothly as Auburn opened up the contest “on script.” That simply means that coaches often have 10/12/15 plays that are pre-selected and practiced that will be called in sequence to begin the game.

The Tigers’ offense managed t0 score on both drives where the script was in play, but only managed three scores on the next 10 possessions. Offensive coordinator Chad Morris must adapt better as the game goes on to generate more points for the Auburn offense.

“Proud of our guys fighting to the end.” — Auburn head coach Gus Malzahn’s opening remarks following 30-22 loss to South Carolina
Coach Malzahn chose to look at the positives (as much as possible) in the postgame press conference following the game against South Carolina. He did not rip his players, call out individual failures or assign blame to officials.

However, players giving good effort in a closely contested SEC game is the bare minimum expectation. Anything less than that is completely unacceptable. Gus Malzahn knows that and is usually just not that interested in discussing anything of substance with the media. Great fight and effort from Auburn football players is expected. It is up to this team and coaching staff to drastically improve in execution and production.

Zack Shaw is a contributing writer for Yellowhammer News and former walk-on for the Auburn Tigers. You can contact him by email: zack@new-yhn.local or on Twitter @z_m_shaw