This Alabama nonprofit is leading the way in animal therapy

They say dogs are a man’s best friend, but a Birmingham-based nonprofit is proving that they can also be much more than that. Animal-assisted therapy provider Hand in Paw has been serving Central Alabama since 1996 when former Greater Humane Society of Birmingham Executive Director Beth Franklin founded the organization.

After years spending day in and day out with animals at the humane society, Franklin began to notice an incredible healing connection between animals and people who were suffering either emotionally or physically. As a result of her observation, she started pet visitation programs for autistic children and troubled youth using humane society animals. Shortly after, she expanded with formal pet visits to nursing homes. When she realized the immense demand for the type of animal-assisted therapy she was offering at the humane society, Franklin took a leap of faith. She resigned from her position, became a licensed animal therapy evaluator and instructor, and founded Hand in Paw.

“The name come from the knowledge that just as the best results come from the collaboration between two people working hand-in-hand, the most effective animal-assisted therapy is conducted through the partnership between a handler and the therapy animal,” she says. 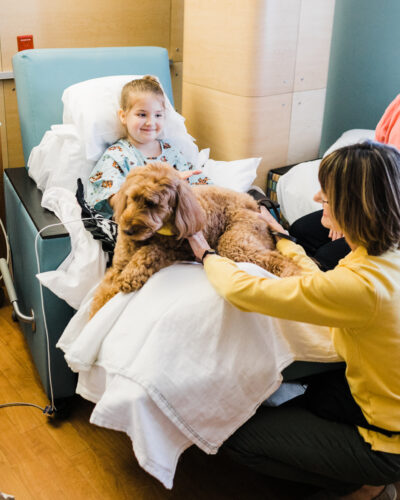 In the 25-plus years since Franklin took that leap of faith, Hand in Paw has grown exponentially. Today, the nonprofit has more than 60 program partners—such as hospitals, schools, nursing homes and human service organizations—across Central Alabama and Tuscaloosa. The organization works with 95 volunteer teams, each of whom have completed a four-week workshop to learn how to serve as a safe and effective therapy team. The volunteers also must pass a Hand in Paw evaluation that tests the dog’s obedience skills and utilizes role play to simulate real-life visits.

In 2021 alone, Hand in Paw facilitated 24,125 therapeutic interactions over 855 visits. Individuals impacted by the nonprofit include children with special needs, at-risk youth, struggling students, people with chronic and terminal illnesses, the elderly, those experiencing grief, and individuals with mental illnesses.

The benefits of animal-assisted therapy, says Hand in Paw Director of Communications Brittany Filby, are innumerable. To list a few, research has shown that petting a dog can lead to a drop in blood pressure and an increase in oxytocin, which boosts happiness and empathy. Animal-assisted therapy can also lower cortisol, a hormone associated with stress, and increase serotonin. Studies have also shown that dogs can help ease the effects of Alzheimer’s Disease.

“The bond between pet and human is one of unconditional love, which can teach and support feelings of self-worth and value, especially in children,” Filby says. 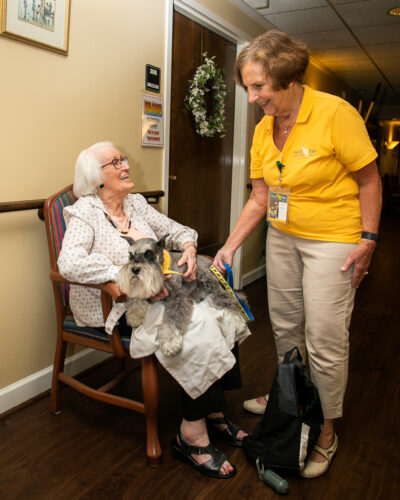 Stinnett’s son Trey is on the autism spectrum and has an intellectual disability. Stinnett says from an early age, Trey struggled to sit still for reading instruction. When Hand in Paw visited his classroom, she saw all of that change.

“Trey brought home a business card with a photo of a wonderful dog, Boo,” she remembers. “He told me Boo loved it when he sat beside her and looked at books.”

When she went in to observe, she couldn’t’ believe what she saw. Boo was calmly sitting in Trey’s lap as he pet her and looked at a book with Boo’s owner Penelope.

“I was moved immediately by my anxious son’s ability to be very still and concentrate on the book,” she says. “He wanted to make Boo proud of him. Driving home, I realized that Hand in Paw was a blessing to my son. When the opportunity to serve as executive director presented itself, I was here. Knowing that my work will improve human health and wellbeing through animal-assisted therapy makes me immensely proud of my work, this organization, and the way it is serving so many people in my hometown.”

As Hand in Paw embarks on its 26th year with a goal to impact more community members than ever before, Stinnett says the organization will continue to focus on all the avenues of assistance they’ve provided in the past, while placing an increased emphasis on serving children, teens, and adults experiencing depression and anxiety. They’ll also recruit more qualified volunteer teams to lead the way in grief and trauma programming.

“Compassion, kindness, and understanding are needed in this world,” Stinnett says. “Hand in Paw is prepared to meet this need.”