Sessions: ‘I will not stop defending the police’

Former U.S. Attorney General Jeff Sessions on Wednesday bashed the “defund the police” movement that is growing in popularity on the left-wing of the Democratic Party.

“This whole thing is dangerous for our country. Our police forces are critical to America, if we don’t support them we’ll see bad things happen,” Sessions told Fox Business Network “Mornings with Maria” host Maria Bartiromo about the defund movement.

Sessions is currently in a Republican primary runoff election against former Auburn football coach Tommy Tuberville that will determine who runs against Senator Doug Jones (D-AL) in November.

Bartiromo asked Sessions about the defund the police movement in the context of a Twitter fight between Sessions and Rep. Ilhan Omar (D-MN), who is by her own admission one of the farthest left members of the Democratic Party. 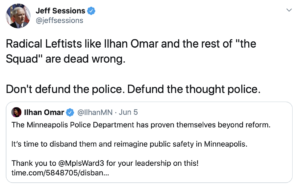 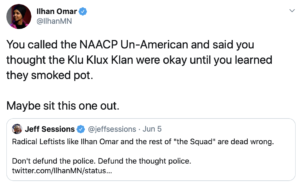 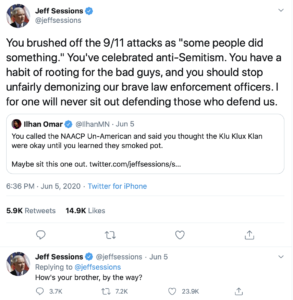 Sessions’ final retort on Twitter with Omar is a reference to a story that alleges the congresswoman married her own brother to get him through the United States’ immigration process.

In his interview with Bartiromo, Sessions rehashed the Twitter back and forth before returning to the topic of policing.

“You pull back police, you defund police, you tell them not to make arrests, not to be out on the streets, to have a much lower profile. Then the criminal element increases,” Sessions remarked.

Sessions has been endorsed by several county sheriffs in Alabama and two out of state police unions.

Polls have shown Sessions falling behind in the wake of President Donald Trump’s endorsement of Tuberville and Trump’s further excoriations of Sessions’ time as attorney general.

An internal poll conducted this week by the Sessions campaign showed Sessions appearing to regain some of his old support, while still remaining several points behind Tuberville.

Sessions concluded the interview by saying he believed the people of Alabama were “happy and pleased” to have someone with his record of police support running for the Senate.