Report on children in Alabama shows some progress made over last decade, continuing disparities based on income

A new report shows Alabama has made progress in several key health and education categories over the last decade, while stark disparities in achievement remain between kids from low and high-income households.

The report was published by the group VOICES for Alabama’s Children, an institution that advocates for Alabamians under 18 years of age.

In categories such as on-time high school graduation, Alabama has made strong progress, with only 10% of students not graduating on time compared to 28% a decade ago.

At the same time, there is currently a 29-point gap in math achievement between a 4th grader below the poverty line and one above it.

Data collection for the report stopped in mid-March according to VOICES, making the document a benchmark for how the state was doing before the coronavirus pandemic.

“Even though most of this report focuses on data collected before everything was turned upside down by the coronavirus, it was important to us to publish this year’s data book to help establish a clear benchmark from which we could measure the full impact of the pandemic on Alabama’s children and families,” said Stephen Woerner, executive director of VOICES for Alabama’s Children, in a release.

Alabama continued to fare poorly when compared to the rest of the nation in several key categories. The state was 45 in economic well being, 43 in education, 47 in health, and 44 in family and community.

Overall, in terms of child well-being, Alabama placed 47 – ahead of Louisiana, Mississippi and New Mexico.

In multiple key education statistics, the state was basically flat from a decade ago.

Last year 72% of Alabama’s fourth-graders were not proficient in reading – the exact same percentage as in 2009.

Similarly, 79% of Alabama’s eighth-graders were shown to lack proficiency at math – down only 1% from a decade ago.

Conversely, Alabama has made progress by several metrics over the last ten years.

Likewise, 31% of children were shown to have parents without secure employment – down from 37% in 2009.

The report highlighted Shelby, Limestone, Lee, Baldwin and St. Clair Counties as those that do the best in terms of the well-being of their children. 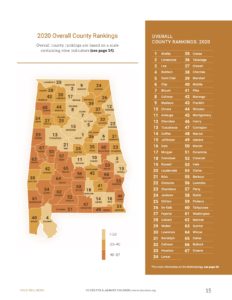 To determine an overall picture of child well-being VOICES combined nine factors across the categories of health, education, safety, and economic security.

Black Belt counties – those south of Tuscaloosa, west of Montgomery and north of Mobile – are revealed in the report to be some of the worst-performing places in Alabama.

The full report can be read here.

“[M]any of the inequities exposed by COVID existed before the virus,” Woerner said in summary of the report’s findings.

“The coronavirus did not create our fragile childcare system, but it has caused significant challenges. The outbreak did not lead to a lack of broadband access in rural counties, but it left many students without access to online learning. That is why it is important that we not only tackle the immediate needs of children and families, but we also work to find long-term solutions to address the systemic inequities that existed before they were exposed – and worsened – by the COVID-19 crisis,” he added.