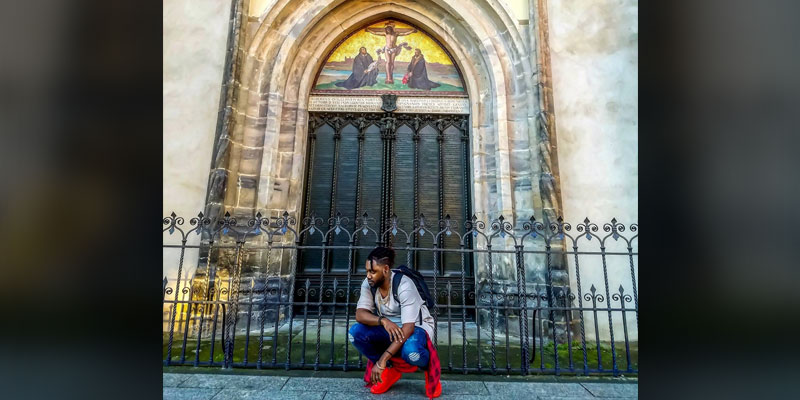 While many will see this last day of October, 2017 as nothing more than another Halloween, this 500th anniversary of the Protestant Reformation is historic for anyone who places their hope in Christ.

The common belief is that Martin Luther nailed his thesis (95 Theses) on the door of Wittenberg Castle Church on October 31, 1517—500 years ago today. When he did so, this law student—turned monk became a lightning rod in his medieval culture because he could no longer tolerate the misguided status-quo. Determined to correct the wrongs of the high church to which he belonged, Luther exposed its cheapened teachings that not only misled its followers but lined the pockets and secured the power of its rulers.

Pope Leo X once described Luther as a “Wild boar loose in the vineyard of Christ and as a stiff-necked, notorious, damned heretic.” Imperfect Luther was, but one thing is certain, he had a bead on what true Christianity is and isn’t, and he possessed a dogged determination to steep his contemporaries in the fluency of the Gospel.

Central to his effort that became the Reformation are three big ideas:

One: The Bible is the sole authority in all matters of life and the Christian faith.

As 2 Timothy 3:16-17 (ESV) says: “All Scripture is breathed out by God and profitable for teaching, for reproof, for correction, and for training in righteousness, that the man of God may be complete, equipped for every good work.”

Not only does this constrain one from self-indulgence, it also empowers everyday people to better their world. This is important because, in today’s power-hungry, corrupt culture—just like the in which Luther lived—those who view the Bible as their authority are not intimidated by people in power. What the world sees as foolishness, Christians see as freedom. With the Bible as their authority, Christians are emboldened to engage the culture according to its truths. For they are certain that the powerbrokers to whom others clamor to curry favor have no bearing on the ultimate outcome of their lives. Therefore, they are free to fight for change, just as Luther did, without regard for the temporary blowback.

Another big idea in Luther’s 95 Theses is that mankind is here to glorify God, not themselves. As I Peter 4:7 says, “…. in everything, God may be glorified through Jesus Christ.” There are many ways this truth affects the practice of Christianity today, but three big ones are our views of work, worship, and ourselves.

Concerning worship, before the Reformation, there were no sermons, only mass; and congregants hadn’t sung for centuries, they only recited liturgies. By reminding Christians that their chief aim is to glorify God, their view of worship changed from a mentality of recitals to one of responsiveness to God. This changes a person’s outlook on most everything.

As Luther wrote: “The devil, the originator of sorrowful anxieties and restless troubles, flees before the sound of music almost as much as before the Word of God….Music is a gift and grace of God, not an invention of men. Thus, it drives out the devil and makes people cheerful. Then one forgets all wrath, impurity, and other devices.”

With respect to work, the idea of glorifying God above all else helped Christians see their vocation as their calling. Contrasting his Biblical worldview to the model of all-powerful church leaders of his day, Luther reminded ordinary folks that if they went to work with the idea that “Today, I will serve the Lord,” their work mattered eternally. As he put it, “Every occupation has its own honor before God. Ordinary work is a divine vocation or calling. In our daily work, no matter how important or mundane we serve God by serving the neighbor and we also participate in God’s on-going providence for the human race.”

Regarding ourselves, the truth that our purpose is to glorify God percipitates fundamental life change. We live a culture full of self-promoters, and when self-promotion becomes one’s chief aim, that person leaves a string of broken relationships in his wake. Blind to how badly he repels even those who care about him, his obsession with his own image and achievement obscures what matters most. What’s more, he’s rarely able to participate in the most powerful of all human acts: forgiving others, not to mention forgiving himself. For how can a wrong or even a mistake be overlooked if it hurts his reputation? These are “Look here I am” kind of people instead of “Look, there you are” kind of people, and tragically, they often wind up lonely and depressed under the exhaustion of self-promotion. By choosing to glorify God instead of themselves, this curse is broken.

In Luther’s Day, the Catholic church taught that good performance paved the way to heaven. Every honest person knows his failures are too great to atone for because honesty compels him to admit that he will only fail again. That’s why Luther was determined to expose this lie by pointing out the liberating truth of Ephesians 2:8-9 (ESV): “For by grace you have been saved through faith. And this is not your own doing; it is the gift of God, not a result of works, so that no one may boast.” As Luther stated:

This tenant of the Reformation is vitally important because it reminds us that God does not view believers through the lens of their failures, but by the right-standing imparted to them by the work of Christ. As Milton Vincent wrote in his book, A Gospel Primer:

The gospel reminds me first that what I actually deserve from God is a full cup churning with the torments of His wrath (Rev. 14:10). This is the cup that would be mine to drink if I were given what I deserved each day. With this understanding in mind, I see that to be handed a completely empty cup from God would be cause enough for infinite gratitude. If there were merely the tiniest drop of blessing contained in that otherwise empty cup, I should be blown away by the unbelievable kindness of God toward me. That God, in fact, has given me a cup (Psalm 116:12) that is full of ‘every spiritual blessing in Christ’ (Ephesians 1:3) and this without the slightest admixture of wrath, leaves me truly dumbfounded with inexpressible joy. As for my specific earthly circumstances of plenty or want, I can see them always as infinite improvements on the hell I deserve.

Measuring Luther’s influence is far too great a task for this brief forum, but suffice to say he made it clear that to believe the Gospel is to be saved, and that matters not only in eternity, but in our work, our worship, and our everyday lives here on earth.

As Jeff Vanderstelt said in his powerful book, Gospel Fluency, “Jesus didn’t call us to merely make a decision for him. He doesn’t need our vote of approval. He doesn’t want deciders. He wants disciples—people who are devoted to becoming more and more like him in everything, every day…The gospel tells us that the new creation includes a new you, a new heaven and earth, and a new King at the center of it all—Jesus Christ…The gospel is not just about what has happened. It’s also good news about what is happening right now and will happen in the future.”