Redistricting Bill Coming Down to the Wire 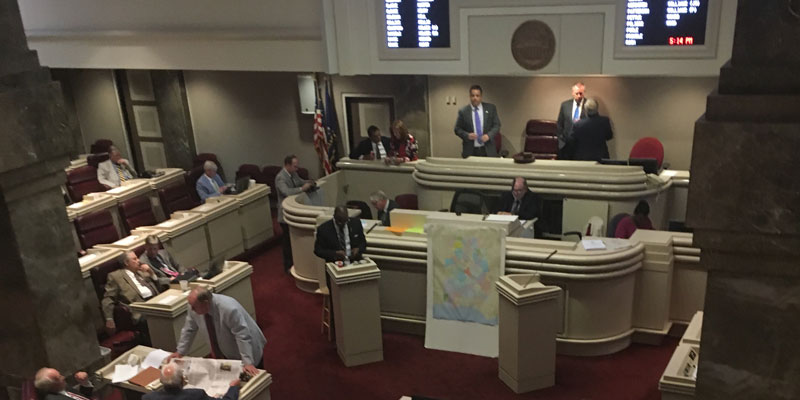 As the legislature wraps up this week, one measure that’s encountered intense debate is the state’s redistricting bill.

Back in 2012, the Alabama legislature reconfigured its districts, which is standard procedure following the census every decade. While the 2014 elections were based on these districts, the Alabama Democratic Conference and the Legislative Black Caucus challenged them in federal court, and last January, the federal courts ordered Alabama to redraw nine House and three Senate districts before next year’s election.

A new bill was proposed in the Alabama House to address those concerns. However, because Jefferson County—the state’s most populous—didn’t have an equal number of Democrats and Republicans in the new plan, Democrats moved to delay the bill.

Specifically, they seized on a requirement that allows any Member of the House to demand that a bill is read aloud, in its entirety, before a vote can take place. In this case, the redistricting bill was a 539-page behemoth. Clearly, the request was nothing more than a stall tactic, as House Rep. Barry Moore (R- Enterprise) explained:

“They were fully in their right to do this because House rules state that a bill can be read at the request of any member. However, while it’s permissible, everyone understands that it’s nothing more than a stall tactic and the unfortunate thing is, it’s proved to be a massive waste of everyone’s time, not to mention taxpayer dollars.”

While the Democrats demanded that the bill is read in full, they didn’t want to do it themselves, so they employed the use of a computer to do the work for them. The only stipulation to the rule they invoked is that one House Member asking for the reading must stand at the podium while the computer reads the bill. After five hours on Wednesday and eleven more on Thursday, the monotonous computer-reader finally completed the task.

When it was all said and done, the work of the Alabama House had been forced to a grinding halt for the better part of two full days, but in the end, the bill passed the House by a vote of 70-30, along party lines.

House Speaker Mac McCutcheon told the Associated Press he believes the bill is an equitable resolution that addresses all concerns of the federal courts.

“We tried to get input from everybody. We also have looked at everything the court has ordered, and we feel like we have complied with that. From that perspective I feel like we’ve got the best piece of legislation that we can come up with,” McCutcheon said.

This week, the legislation moves to the Senate, where it will likely be passed into law. However, one Member of the House said today he believes the computer reading will start all over again Wednesday in the Senate, adding that the Democrats know it’s a vain effort, leaving him with no other conclusion than “they’re just doing it for no other reason than to make everyone angry.”