Mo Brooks not running for the Senate in 2020, would consider 2022 only if Shelby retires 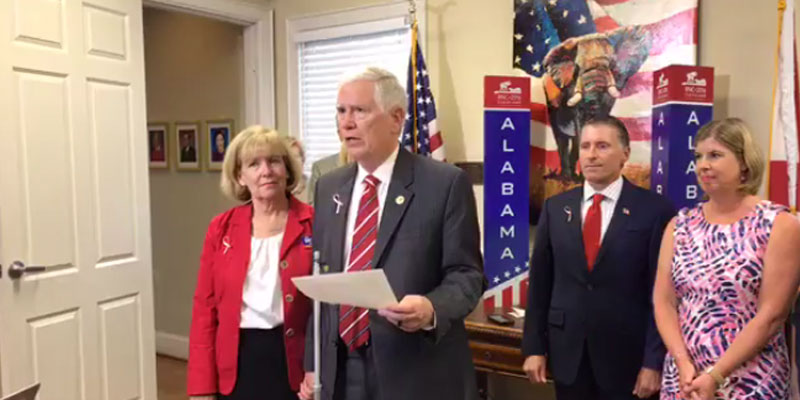 Congressman Mo Brooks (AL-05) on Friday said that he will not be a candidate for the U.S. Senate in the 2020 election cycle.

In an interview on Talk 99.5’s “Matt and Aunie Show,” Brooks was more definitive than he has been in the past, when he left wiggle room by saying a “seismic” event could change his mind on running for re-election to his north Alabama House seat.

When asked by host Matt Murphy whether he has made “a final decision,” Brooks responded, “I have. I will not be running for the U.S. Senate in 2020.”
He then explained the factors and thinking that went into the decision.

“In 2017, I had assurances from the White House that Donald Trump would either endorse me or be neutral. I didn’t anticipate that he would endorse, but I thought he’d be neutral. We relied on those representations, decided to run for the United States Senate, would have come in second in the primary but for the Mitch McConnell forces and perhaps others persuading – using whatever measures of persuasion they had – persuading Donald Trump to endorse Luther Strange. That pushed Luther into second and the rest is history,” Brooks reminisced. “Doug Jones ended up getting elected in a ruby red state.”

“So, I wanted assurances to prevent that from happening again,” he continued. “Those assurances are not forthcoming, and so I’m not going to run.”

“You get kicked by a mule once and it’s the mule’s fault; you get kicked twice, well it’s your own fault,” Brooks quipped.

He did not close the door on a Senate run in a future election cycle.

He stipulated that if – and only if – Sen. Richard Shelby (R-AL) chooses not to seek re-election would Brooks consider a 2022 U.S. Senate bid.

“Richard Shelby has not made that a public statement,” Brooks explained on if Shelby would retire or not. “And until such time he makes that retirement statement, you have to infer that he is running for re-election.”

He continued, “I would not run against Richard Shelby in 2022 if he chooses to run for re-election. If he should decide to retire, certainly that is something I would look very closely at, and I probably would make a decision on that shortly after my re-election, if I get re-elected [in 2020]. Subject to, again, whatever Richard Shelby wants to do.”

Speaking on the Republican candidates that have announced 2020 Senate candidacy and those that have been speculated about jumping in, Brooks remarked, “All the ones I have heard right now I would vote for over Doug Jones in a New York minute.”

Brooks outlined, “So far, we have Tommy Tuberville – he’s somewhat of an enigma. He’s predominantly from Florida. I don’t know what his policies are and with someone who’s never been in the heat of battle before, you don’t know for sure if his words will match his deeds if he does get elected. But nonetheless, he’d be better than Doug Jones.”

“Bradley Byrne, I know him fairly well, I like him on a personal level,” Brooks added. “He’s got a pretty good record on a number of issues that are important to me. Have no troubles whatsoever with voting for him over Doug Jones.”

The congressman from the Huntsville area, after mentioning the possibility of Secretary of State John Merrill getting in, then introduced a Shelby County state legislator into the fray that has not been mentioned previously as a potential 2020 Senate candidate.

Brooks said Mooney has the “same belief system” that he holds and is the only person Brooks would potentially publicly endorse in the primary.

“You may see Trip Pittman… get in,” he added.

Pittman is a former member of the state senate who also ran in the Republican primary for U.S. Senate in 2017.

“All these people would make much, much better senators than Doug Jones if you’re a conservative,” he concluded, saying he will “rally around” whomever the Republicans eventually nominate. “Our country needs that. It’s best for America, it’s best for Alabama.”