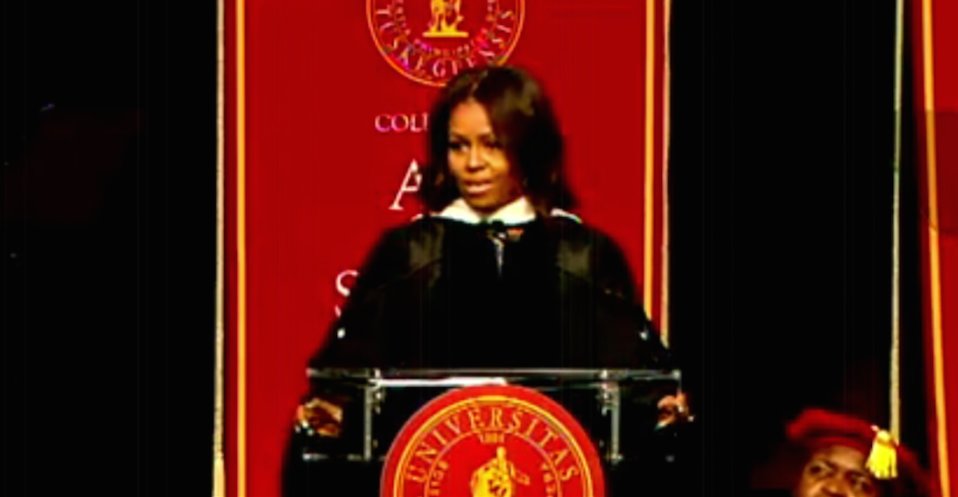 TUSKEGEE, Ala. — First Lady Michelle Obama delivered the 2015 commencement address at Tuskegee University, telling the crowd assembled at the historically black college that “the road ahead is never going to be easy, especially for folks like you and me.”

The First Lady said that she and the President have experienced racism “daily” throughout their lives, even as Mr. Obama has risen to the highest office in the land.

My husband and I know how frustrating those experiences can be. We’ve both felt the sting of those daily slights throughout our entire lives. The folks who crossed the street in fear for their safety. The clerks who kept a close eye on us in all of those department stores. The people at formal events who assumed that we were the help. And those who have questioned our intelligence, our honesty, even our love of this country.

Mrs. Obama’s remarks come at a time when racial tensions have escalated around the country, sometimes sparking violence, as has most recently been seen in Baltimore.

While we’ve come so far, the truth is that those age-old problems are stubborn. So there will be times … when folks look right past you. … They will make assumptions about who they think you are based on their limited notion of the world.

Those nagging worries that you’re gonna get stopped or pulled over for absolutely no reason. The fear that your job application will be overlooked because of the way your name sounds. The agony of sending your kids to schools that may no longer be separate, but are far from equal.

All of that, it’s gonna be a heavy burden to carry. … It can make you feel like your life doesn’t matter. … And as we’ve seen over the last few years, those feelings are real. They’re rooted in decades of structural challenge. … Those feelings are playing out in communities like Baltimore, and Ferguson and so many others across this country.

The solution to many of the country’s racial problems, Mrs. Obama explained, can be found inside the voting booth.

I want to be very clear that those feelings are not an excuse to just throw up our hands and give up. They are not an excuse to lose hope. To succumb to feelings of despair and anger only means that in the end, we lose… The first thing we have to do is vote. Hey, no, not just once in a while. Not just when my husband or somebody you like is on the ballot. But in every election at every level, all of the time. Because here is the truth — if you want to have a say in your community, if you truly want the power to control your own destiny, then you’ve got to be involved.

A portion of Mrs. Obama’s remarks can be seen in the video above, courtesy of CBS News.