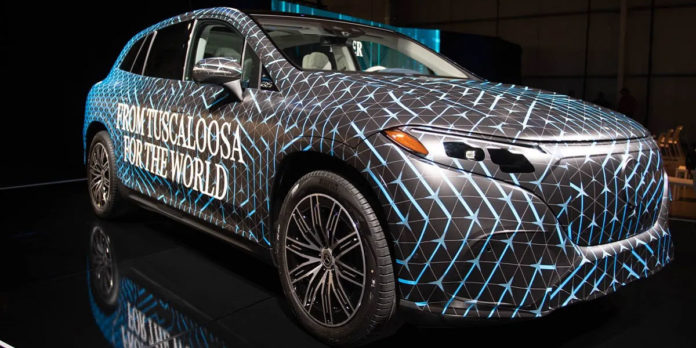 In one of the two assembly plants at the sprawling Mercedes-Benz factory in Tuscaloosa County, workers shift seamlessly from making traditional SUVs with a brand new, all-electric model on the same assembly line. The electric vehicles (EVs) are powered by batteries being produced a few miles away in Bibb County.

While the EVs are sporadic on the line and outnumbered by those with an internal combustion engine, the leaders of the luxury automaker foresee a day in the not-too-distant future when the EVs will outnumber the traditional models on the way to an all-EV line first in that plant and then in the other assembly plant, as well.

These changes drive home two realities: EVs are the wave of the future in the automotive industry, and Alabama does and will play a pivotal role in that transition and in the growth of Mercedes-Benz.

“The opening of our new battery plant in Alabama is a major milestone on our way to going all-electric,” said Mercedes-Benz CEO Ola Källenius. “With our comprehensive approach including a local cell sourcing and recycling strategy, we underline the importance of the U.S., where Mercedes-Benz has been successful for decades. We’re proud to create new, future-proof jobs to build all-electric SUVs ‘Made in the USA’ at a plant that is such an established part of our production family since 25 years.”

Mercedes-Benz discusses its shift to electric vehicles from Alabama NewsCenter on Vimeo.

In 1997, the first Mercedes-Benz SUV rolled off the assembly line at Mercedes-Benz U.S. International (MBUSI), the formal name of the Tuscaloosa County plant. After several expansions and modifications, MBUSI now is more than 8 million square feet and employs more than 4,500 people while supporting an additional 11,000 jobs with suppliers and contractors. Throughout the years, Mercedes has invested $7 billion in the plant and produced about 4 million vehicles.

Last year, more than 260,000 GLS, GLE, GLE coupe and GLS Maybach SUVs rolled off the assembly line on their way to customers in the U.S. and more than 150 countries around the world.

Now, buyers of the EQS SUV are counted among that number and soon the EQE SUV will join the production line at MBUSI.

A growing field of EVs is music to the ears of Cedric Daniels, Electric Transportation Manager at Alabama Power.

“We are excited to see the growth of electric vehicles in Alabama,” Daniels said. “Having more options for our customers is a good thing.”

“I personally think this is the most exciting time in the automotive industry to make this transformation,” said Jörg Burzer, member of the Board of Management of Mercedes-Benz Group AG responsible for Production and Supply Chain Management.

Mercedes has said that any new production lines built after 2025 will be exclusively for EVs. The automaker has also said it plans to produce only EVs after 2030 where market conditions allow.

Källenius and Burzer both worked at MBUSI before moving on to the top ranks of Mercedes. Källenius said he retains a deep love for college football and barbecued ribs and likes to return to Alabama every chance he gets. Burzer said the experience made him better.

“I had the privilege to work here for three years,” Burzer said. “Everything that I learned about production is coming from here because the culture is completely different. This drive for constant improvement is unbelievable. The team culture here is just unbelievable. You can learn here.”

Michael Göbel is the president and CEO at MBUSI. While Göbel jokes that nobody told him that taking the job would entail a global pandemic, supply chain disruptions and other unforeseen issues, the transition to EVs was a challenge he did take on.

That transition has included a digitalization of the factory floor – a system Mercedes calls MO360 – that relies less on paper and more on digital screens and robotic-driven “shopping carts” that help workers stay on top of what is needed on the vehicle in front of them on the assembly line. Different colored assembly line platforms for EVs and other modifications have helped, along with extensive training.

Göbel said the adoption of the new technologies has gone very well with workers, which Mercedes calls “team members,” who are more than eager to accept the challenge.

“You don’t need to motivate anyone,” he said. “People are so motivated moving into the new technologies.”

A population that is used to cellphones and other digital tools, coupled with a new generation that is even more adept at using such tools, has helped make the transition to an all-digital factory floor easier, Göbel said.

While the past 25 years have been beneficial to Mercedes-Benz, they have also been a transformational time for Alabama. It was an ultimate validation of the state’s workforce training program and helped spur four other automakers to locate in the state, making Alabama one of the leading auto producers in the country.

“With the production launch of the groundbreaking M-Class 25 years ago, Mercedes-Benz helped put our state on the cutting edge of automotive manufacturing,” Alabama Gov. Kay Ivey said at Tuesday’s grand opening of the battery plant in Bibb County. “Today, with the opening of this new battery plant, Alabama is helping Mercedes accelerate its production of industry-leading electric vehicles.”

That 700,000-square-foot battery plant along with a consolidation logistics center and after-sales hub were part of an additional $1 billion investment Mercedes made in Alabama that extended its direct investment beyond the Tuscaloosa County site.

“It has brought growth and jobs,” said Jeremy Lightsey, chairman of the Bibb County Commission. “It’s going to help the city of Woodstock and the county as a whole.”

Mercedes has filled 200 of the 600 expected jobs at the battery plant. It has one line operating and a second one planned.

Burzer said Alabama stands out among other plants because its workforce is “so much more flexible compared to what we experienced in other parts of the world.” He said the community also has made a huge difference. Another key factor, Burzer said, is the products produced here.

Or, as CEO Källenius said, “SUVs from Alabama remain in red-hot demand around the world.”