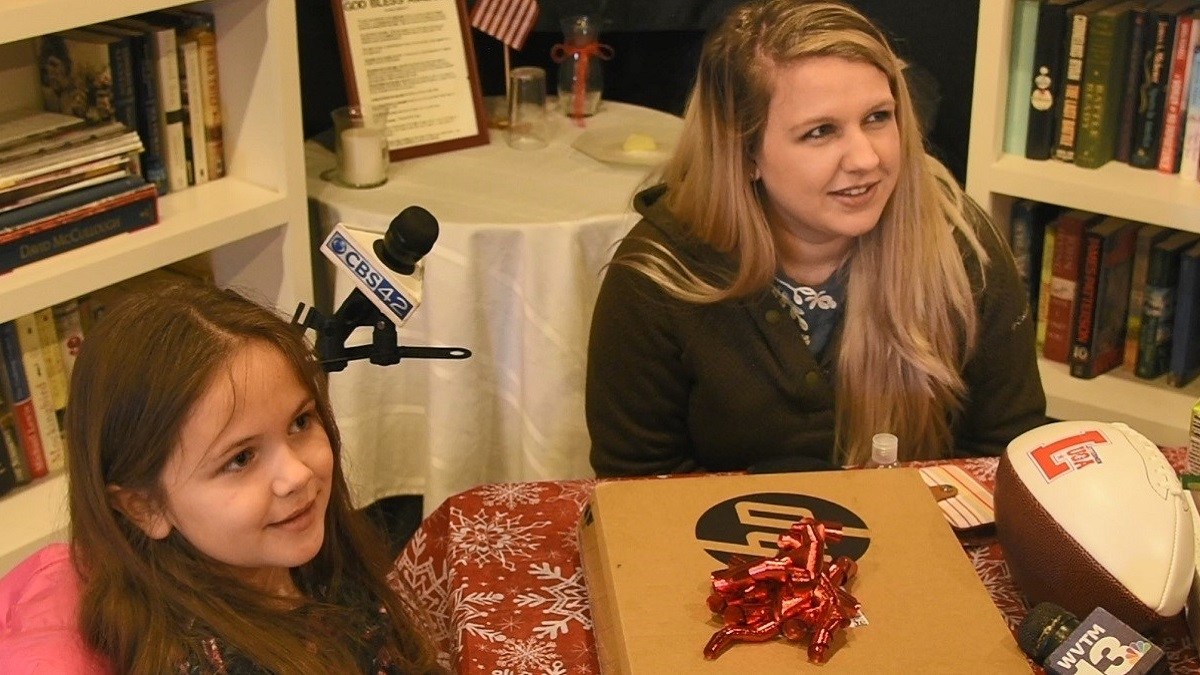 It was seasonally appropriate that Darryl Fuhrman and his son Miller motored from Homewood to Huntsville in a red 2016 Dodge Charger. Like Santa and an elf riding in his sleigh, the two were delivering holiday cheer in the latest project of Lettermen of the USA.

Of course, the Fuhrmans weren’t the only ones. And their helpers weren’t necessarily in a red vehicle, much less a sleigh.

Secretary of State John Merrill was on hand for both presentations. He added signed copies of “Alabama: Bicentennial,” the history book he coauthored to benefit fourth-grade students.

Children of fallen heroes get laptops from Lettermen of the USA from Alabama NewsCenter on Vimeo.

LotUSA was awarded a $15,000 grant from the Alabama Coronavirus Relief Fund to purchase laptop computers for Gold Star Children of Alabama’s military families. American Gold Star Children are survivors who have a parent who was either killed in action or died while serving in the U.S. military.

“It’s an amazing time of the year,” said the elder Fuhrman, founder and president of LotUSA. “I know it’s unprecedented times too, but we still have the Christmas cheer in our community and in our state. That’s what it’s all about, us being able to give back to Gold Star families and extend our programs.”

Madison’s Lori Woeber, a homeschool mom, was at the Huntsville luncheon event. LotUSA had laptops for her sons Owen and Nathan, but Nathan was sick. Their brother Jacob stood in for him.

“At the beginning of the school year, I had enough money to buy one laptop for my three children,” she said. “They’ve all been sharing, so they have to take turns, so the school day goes really long. We got two more laptops today and my children don’t have to share anymore, so it’s amazing. It’s an amazing gift.”

Earlier, Bailee Stone was at the Homewood breakfast event with her daughter Elyza Grego, a third-grader at Springville Elementary.

“This means so much to us,” Stone said. “It’s amazing for them to do this and be able to give her a laptop to help with schoolwork. Her school is now online and starting back in January they’re going half and half, with half traditional and half at home.

“Instead of all of us trying to do her schoolwork in one little area, she can now get on there and do her work.”

Darryl Fuhrman said Tuesday’s laptop giveaway was amazing, especially since it was at Christmas time.

“We’ve never done anything around Christmas time, so we’re very excited about this new program and what it can mean,” he said. “We hope we can do it every year. That’s the way we look at it. We hope we can continue to do this every year with these Gold Star families.”