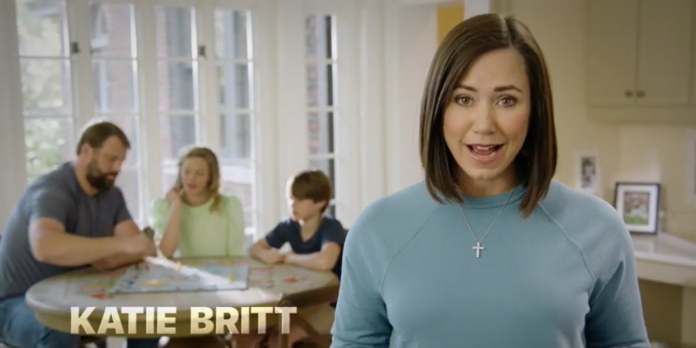 The 30-second spot features Britt’s family playing a game of “Democrats,” a fictitious game modeled after the popular “Monopoly” board game. Britt blasts what she calls Biden’s “reckless” fiscal agenda and calls for pay to be withheld from members of Congress until the federal budget is balanced.

“The Biden Democrats are spending our tax dollars like my kids treat Monopoly money,” asserts Britt in the ad before her son says, “I’ll take three more hotels.”

Britt continues in the ad, “The reckless spending in Washington is driving up prices on hardworking families and leaving our children with crushing debt. We need to end the liberal games now. If Washington politicians don’t balance the budget, they shouldn’t get paid. No balanced budget, no paycheck. Come on y’all, it’s just common sense.”

In a statement accompanying her TV ad release, Britt proclaimed that Democrats’ spending agenda had served to exacerbate the national inflation crisis.

“Joe Biden’s radical agenda and disastrous decisions are crushing Alabama families, small businesses, farmers and retirees,” declared Britt. “Inflation has skyrocketed, and Democrats’ out-of-control spending continues to pour fuel on the fire. We need to take some Alabama common sense to Washington by working to balance the budget and stop driving down the value of Alabamians’ hard-earned money.”

She concluded, “In the Senate, I’ll fight to end the reckless spending, achieve American energy independence to reduce fuel costs, and put more money back in the pockets of people in every corner of Alabama.”