Home of the throwed roll 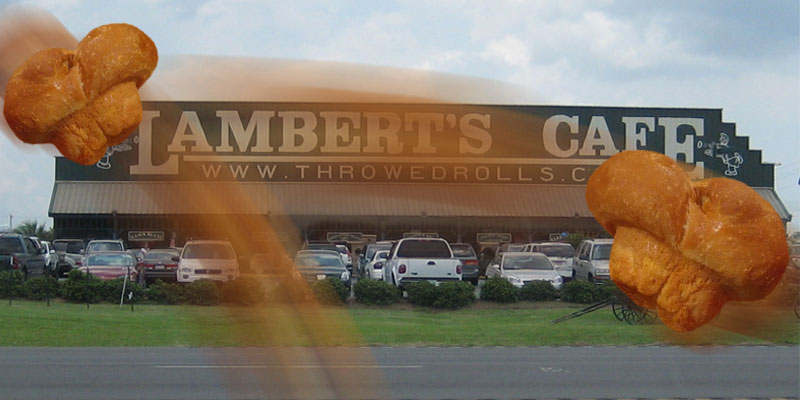 Foley, Alabama—I’m sitting in Lambert’s restaurant. This is the “home of throwed rolls.” Servers stroll the dining rooms, tossing yeast rolls at customers like four-seam fastballs.

A waiter lobs one at me. It hits me square in the teeth. He laughs. So does my wife.

It leaves a mark.

Our waitress brings our plates. Chicken-fried steak, collards, fried potatoes. She wishes me a happy New Year’s and asks, “Have you had a good twenty-sixteen?”

You bet your suspenders I have.

While I haven’t done anything noteworthy this year, I did get rid of our rusted 1974 mobile home. That was a biggie.

It got hauled to the county dump by a team of highly specialized ambulatory demolition experts with names like, Delmar, and—I’m not making this up—Willie Joe Mavis.

When the lovable single-wide left our property, it bore a yellow banner, reading, “oversized load.”

Willie played “Taps” on the bugle.

Another 2016 highpoint: I kept a New Year’s resolution. A little over three hundred days ago, I resolved before King and country to go fishing every weekday at 2 P.M.—even if only for ten minutes—and if need be, to include beer.

It wasn’t always easy, but the Lord provides.

The truth is, this has been the best year of my life. And I’m not just saying that.

Let me tell you about Randy.

We grew up together. He was a kindhearted soul who raised four kids on a millworker’s salary. He and his wife were salt-of-the earth folks. They ate healthy, abstained from alcohol, sodas, sugar, and barbecue.

He was raised as a foot-washing Baptist and could quote the Old Testament backwards—eyes shut.

I once watched Randy get caught in a fistfight outside a beer-joint. Randy wasn’t drinking. He refused to throw a punch and he got beat to a pulp. His soft-spokeness was something to see.

Randy died this year. Doctors never saw it coming. Nobody did. His wife stood on their porch watching an ambulance escort the body of a forty-two-year-old to the county morgue.

It rattled me. What’s my point?

This: tonight I watched a sunset in a peanut field. Beside me was a woman who once promised she’d grow old with me. She hooked her arm around mine and said, “I’m cold, honey.”

So we went to Lambert’s.

I’m no fool. I know that nothing lasts forever. One day, she or I will give up breathing, and the other will give up smiling. One day, there will be no peanut fields, no arm-hooking, and no yeast rolls.

Don’t let anyone tell you the best is yet to come. We’re alive.

Sean Dietrich is a columnist, and novelist, known for his commentary on life in the American South. His columns have appeared in The Birmingham News, The Tallahassee Democrat, South Magazine, the Bitter Southerner, Thom Magazine, Mobile Bay Magazine, and he has authored five books.
You can read more of his work on his website here.