MONTGOMERY — Liberal activists once again have traveled from around the state — and the nation — to protest at the Alabama Public Service Commission (PSC).

Ahead of the beginning of a hearing on Monday morning regarding a proposal by Alabama Power Company pending before the PSC, protesters were bussed in to make their environmentalist agenda heard.

First load of protesters have been bussed in ahead of today’s Alabama Public Service Commission hearing pic.twitter.com/XduT3BNZMg

Leading the protesters on Monday was Cara McClure, one of the leaders of late-2018 protests in Hoover following the death of E.J. Bradford, Jr. at the Riverchase Galleria. McClure in the 2018 cycle ran for the Place 1 seat on the PSC, ultimately losing that bid.

During that failed campaign, McClure was tied to the California-based “Citizens’ Climate Lobby,” and during the Hoover protests, she publicly declared, “I’m bringing in folks from all across the country to prepare for battle.”

On Monday, multiple attendees at the hearing showed up beforehand apparently straight from the airport, wheeling in suitcases as they exited ride-sharing company vehicles. 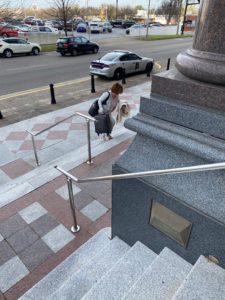 The Monday protest quickly became a campaign rally for Democrat Laura Casey, who is running in November’s general election against incumbent PSC President Twinkle Andress Cavanaugh, a conservative Republican who blew away her primary opponent last week. Cavanaugh is an official co-chair of President Donald Trump’s reelection campaign in Alabama, and one protester on Monday cited this staunch support of the president as reason to support Casey.

The hearings this week are about Alabama Power’s proposal to upgrade the reliability of the company’s grid by adding 2,400 megawatts of capacity. Of that total, 2,000 would be accomplished through utilizing natural gas and 400 would come from solar power paired with battery storage technology.

The company has explained that it is now winter-peaking, with a peak load time of about 6:35 a.m. CT in the winters. Because current solar battery technology only holds power for approximately two hours, it is not feasible to use solar to increase the grid’s capacity/the winter reserve margin for when that capacity is most needed: in the morning hours when the sun is not yet out.

However, the protesters on Monday — mirroring language later used by formal opponents to Alabama Power’s plan during the day’s hearing itself — proclaimed that all the natural gas in the proposal should be replaced by renewable sources. The protesters did not explain how this would work. While protesters and attorneys in the hearing extolled the cost-effectiveness of solar, they failed to produce a plan to make the sun come out when the grid needs power.

Chris Underwood, who said she was from Homewood, began by asking, “I want to know why Alabama Power proposes to build new gas plants when it is cheaper to build solar industries?”

One speaker just decried utilizing natural gas, calling for natural gas to be replaced with solar and claiming that’d be cheaper (short: it wouldn’t, and capacity wise that wouldn’t work) — looks like they’ve moved beyond just being anti-coal to totally anti-fossil fuel pic.twitter.com/PACZ0Pq8L5

Underwood further spoke about the need to embrace climate change as a problem in Alabama.

One protester, Keith Williams of Birmingham, even called the usage of natural gas “a war on the poor.”

Teresa Chandler, who said she was with Sweet Alabama, claimed, “I’m also here because my children can’t be here. And they have been asking me, ‘What is going on? Why are we investing in obsolete technologies? Why are we on the hook for 40 years more of fossil fuel technology when there’s better technology out there? When there’s a coming energy crisis. And we’re going to be on the hook for this. Momma, you’ve got to fight for us.’ And so, I’m here because of my kids.”

To be clear, the proposed Alabama Power natural gas capacity expansions would use state-of-the-art technology that is more efficient than existing facilities utilized and currently available to the company. The proposed expansion, if approved and then once it would be operational by January 2024, would be dispatched before older, less efficient systems. Chandler, like those who spoke before and after her, was not able to name the “better technology” that could increase capacity in a cost-effective, realistic manner. She did, however, further assert that “only the rich people will be able to afford fossil fuel technology in 20 years.”

This speaker claiming she’s here because her children can’t be but they’ve been asking her why fossil fuels are used in Alabama instead of renewables… pic.twitter.com/fzJdJeH6g3

While “The War on Coal” has been well documented over the last decade or so, it now simply appears that natural gas is on the chopping block as well.

California-based Sierra Club, one of the formal opponents in this week’s hearing, has publicly bragged about their desire to kill off natural gas now that they have permanently damaged the thermal coal industry. This fight has apparently now moved to Alabama, underscoring the importance of the hearings.

The Alabama Solar Energy Industry Association, as well as traditional environmental groups like GASP and Energy Alabama, are also formal intervenors in the hearing, opposing the Alabama Power plan.

While the intervenors made it clear that they are totally against the usage of natural gas, the president of the Alabama Coal Association took a much more balanced, realistic stance. Patrick Cagle gave an opening statement at the hearing, beginning by saying, “The Alabama Coal Association supports a diverse generating portfolio, which includes natural gas, hydro, renewable energy, nuclear and, as you would expect, coal.”

“However our participation in this proceeding is not on behalf of a fuel supplier but rather than on behalf of some of the largest industrial customers in Alabama,” he continued. “Our members operate the deepest underground met coal mines in North America. This met coal is used to make steel. It’s exported to steel makers around the world through the Port of Mobile. Miners working in Alabama’s met coal industry earn an average salary of over $100,000, and this is a growing segment of the coal industry.”

“Each of these mines use over $1,000,000 a month in electricity,” Cagle explained. “Reliability is critical for underground mines. Everything in an underground mine, including the complex ventilation systems which keep personnel safe — and the $100,000,000 long wall, are electric. The longwall itself uses 4,600 volts of A/C electricity. During the Polar Vortex, at least one of our members had to shut down because their [electricity] load was cut under their interruptible service agreement. On-site backup systems can only power the ventilation systems and the other systems that are essential for safety. The importance of reliability for an underground mine cannot be overstated. If loss of load was to become a regular occurrence for large industrial customers like underground mines, the safety of our members and employees would be put unnecessarily at risk, because there’s no backup to the backup when it comes to onsite generation.”

George Clark, president of Manufacture Alabama, also spoke in favor of the plan, advising that he was speaking not just from a perspective of representing large job creators, but as the chair of the Alabama Workforce Investment Board. Clark stressed that to keep Alabama growing and competitive in the 21st-century economy, the capacity increase is necessary.

“I would urge the commission to approve this in its entirety,” Clark emphasized. “[N]atural gas can respond to peak demands very quickly.”

The protesters were slightly delayed getting started on Monday because restroom breaks were needed after their trips in to Montgomery. They left at the lunch break and did not return. They were scheduled to protest again on Tuesday morning but did not show up.