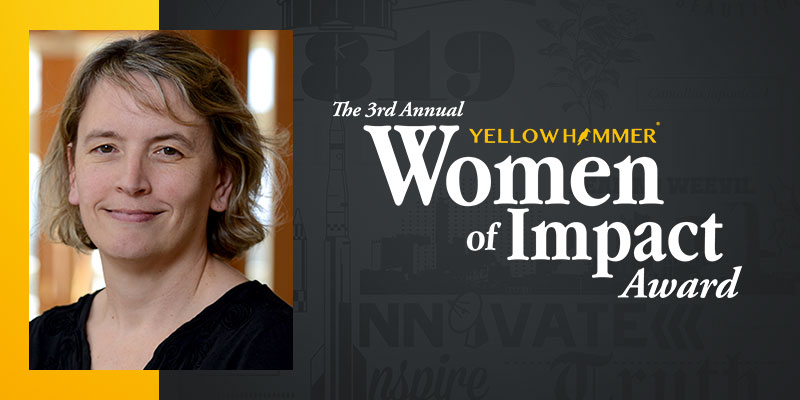 Dr. Jane Grimwood, one of the most cited researchers in the world, uses her knowledge of life’s tiniest building blocks to achieve big things.

Grimwood works at Huntsville’s HudsonAlpha Institute for Biotechnology, where she is a co-director of the Genome Sequencing Center. She leads a staff 0f 25 researchers, along with co-director Jeremy Schmutz, who do cutting edge research that pushes science forward around the globe.

Because of HudsonAlpha’s position as a nonprofit, the work done by Grimwood and her colleagues largely ends up in the public domain for use by anybody.

“We generate the sequence, put it out there, and make it available for other researchers to find the great stories, find the great breakthroughs that are going to make a difference in the world,” Grimwood said in a recent interview with Yellowhammer News.

“That is what really gets me out of bed every day,” she added.

The team Grimwood leads has completed full genomic sequences of more than 50 species of plants that are now in the public domain.

Grimwood was born and raised in the United Kingdom and is the second generation of her family to pursue a career in science; her father enjoyed a career as a chemist.

She earned her first degree, a bachelor’s in science with a major in Agricultural Zoology, from the University of Leeds in the UK. She graduated in 1988 and quickly reenrolled as a graduate student.

In 1994, the scientist began her second set of postdoctoral work in Cell Biology at Dartmouth College in Hanover, NH. Grimwood told Yellowhammer that the move from England to the Boston area of the United States was a “huge culture shock.”

Beginning in 1996, Grimwood took on her third and final postdoctoral project, this time with a focus on Genomics at the University of California in San Francisco.

During the year 2000, shortly after her time with the University of California ended, Grimwood took a job at Stanford University, where she joined what is now the Genome Sequencing Center.

She told Yellowhammer that in 2008 she and her team packed up the whole center and moved to Huntsville to be part of the newly founded HudsonAlpha. Her boss then and still today is Dr. Rick Myers, now the director of HudsonAlpha.

“Everybody in Alabama is so friendly,” she said of her adopted state.

“Huntsville itself has changed a huge amount since I got here,” she added, noting the rapid population growth of the Rocket City.

Schmutz, Grimwood’s co-director of the Genome Sequencing Center, is also her husband.

“Jeremy and I met at Stanford while we both managed the genome center through the Human Genome Project. Those were very long hours, seven days a week, and I guess we realized we got on pretty well and could work together,” she said in a 2015 interview for the HudsonAlpha website.

The pair have a daughter who enjoys coming to work with her parents.

Yellowhammer News asked Grimwood about the state of women pursuing careers in the sciences.

“Females are still in the minority,” she replied about her field, adding, “It’s getting better. We’re making a lot of effort.”

Grimwood explained that a career in science is too often seemingly incompatible with aspects of family life. She told Yellowhammer that the technology used in her field of DNA sequencing changes every two years, so “you don’t have the opportunity to go out for five years and then come back and expect to pick it up, because it’s just totally different.”

“We really need to make an effort to bring more females into science and keep them there,” she asserted.

Grimwood says her advice for young women in the field is to develop abilities outside of the traditional skillset of scientists; abilities like computer programming and a facility with statistics.

“You really need to be able to take all the information you can get from being in the lab and use that in ways that you didn’t need to before. Computers, that is what I always say, make sure you’re comfortable not only with science but also with programming,” she explained.

The world-class researcher shared that both for women in the field and across all science, that struggle to get funding for projects is the main impediment to more progress.

“Competition, although good in some ways, is an impediment in others,” she said, attributing a big portion of the success she has enjoyed in her career to being part of collaborations between many institutions.

“I think the way to move forward is large projects where there is no redundancy, and everybody has the same purpose and goal,” she advised.

Grimwood acknowledged a second problem in her field: “Public acceptance of genomics continues to be an issue. Which I think is hindering in some respects the way to move forward.”

“We’ve made such vast changes, and I think we need to spend more time educating about what that means to understand your genome in terms of your disease risk, for example. What that means to have a GMO – a genetically modified crop,” she commented about her field.

“All of those things in my mind are great advances, but I think it is going to take some time to get people to accept and appreciate how that can help them,” Grimwood noted.

Yellowhammer asked Grimwood what animated her at this stage in her career.

“Two years ago, I wasn’t even having the conversations that I’m having today with groups about what we can do… It is really exciting to be in genomics, just to see where this is going to lead us,” she responded.

Yellowhammer News is proud to name Dr. Jane Grimwood a 2020 Woman of Impact.