Staying at an elite level in any field for 14 years is a difficult task. Human nature gets in the way. Focus drifts. Energy wanes. Complacency sets in.

Not for Nick Saban. Merely two games into his 14th season as Crimson Tide head coach, it appears Saban has assembled as good a team as any in his tenure. That is not good news for the rest of college football.

Yellowhammer’s power rankings are determined by the combined votes of our experts. Their individual votes are noted below.

Here is where things stand: 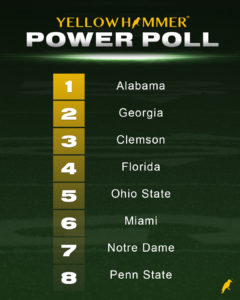 The lowdown: Crisp and beautiful fall weather set the tone yesterday for some great football. Auburn was thumped in Athens by a Georgia team that looked much better than they did the previous week. Alabama quarterback Mac Jones showed serious passing ability this weekend, which is why Alabama continues to claim the number one spot. Miami versus Clemson will be the marquee matchup this upcoming weekend and will most likely decide the ACC.

The lowdown: The team to watch this year might be the Florida Gators. Dan Mullen’s team was a trendy pick to win the SEC East in the preseason, and they look poised to make that happen. The Gators have some of last season’s LSU in them…that is scary for everyone else. The Florida defense is not elite, but the Gator offense is going to score a ton of points on a weekly basis.

The lowdown: Alabama and Georgia have the two best wins so far in this young season. That does not mean they are in the same class. In fact, it does not appear anyone else is in the Tide’s class in 2020. The college football world is waiting on Ohio State to begin its season on October 24 to see if it has some potential to challenge Nick Saban’s squad.