Can Alabama still make it to the playoffs?

Alabama seemed to get its mojo back Saturday after two tough weeks made most college football authorities declare an end to the Tide’s dynasty. Can Alabama still make it to the playoffs?

The Tide bested Mississippi State by 24 points in a game that everyone seemed to give up on in the second quarter.

Alabama. The Bulldogs. The fans. Mike Leach. The commentators. Everyone. Everyone gave up on this game with 38 minutes left to go.

Go back and watch it. South Carolina’s home upset of Texas A&M was the always the game to watch Saturday night even before you take into account Jordan Rodgers’ mania about corndogs.

In a 30-6 gentleman’s blowout, it was another day at the office for Bryce Young and company. So where does Alabama go from here?

THE REST OF THE SEASON
Is it “right” to feel like it’s the end of the world every time your team loses a game? Absolutely. Don’t let anyone – particularly your therapist – tell you any differently.

If your team loses one game these days, they still control their own destiny. Alabama is no different. If Alabama wins out, they’ll go to the SEC Championship game. They’ll play Tennessee or Georgia. If they win there, they’ll go to the playoffs.

CAN THEY DO IT?
Alabama has a knack for turning it all around after a loss, but the reason why it feels different this year is because the 1-point home win against Texas A&M two weeks ago felt like a loss.

The Tide is off this Saturday. After that, they travel to Death Valley for a date with an LSU team at its hottest point in the season. Then, they play Mississippi which has an offense built to shred Alabama in Oxford. Alabama wraps up the season at home with the dumbest and least predictable game of them all – Auburn.

Will they win all those games? Probably. But that’s why they play the games. A costly misstep could place Alabama outside the playoffs for only the second time in the post-BCS era.

If last year was a rebuilding year for the Tide. Not making the playoffs may as well be called a Dubose year.

MEANWHILE, OTHER PEOPLE PLAYED FOOTBALL
No. 18 LSU won a tale of two halves against No. 15 Mississippi, outscoring the Rebels 28-0 in the second half. Brian Kelly’s Tigers are somehow tied for first in the SEC West (Alabama).

Almost half of the SEC took off this week, putting a spotlight on Jimbo Fisher’s fourth loss of the season for Texas A&M – further bringing to surface how very, very lucky the man is to have fleeced Aggie fans for nearly $100 million. So far.

What did we get wrong? What games are you looking forward to? Let us know on Twitter or Instagram. Listen to Throw the Flag wherever you get your podcasts. 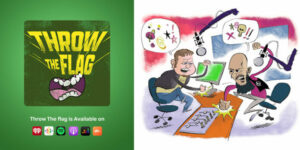