Beth Woodard is a 2021 Woman of Impact 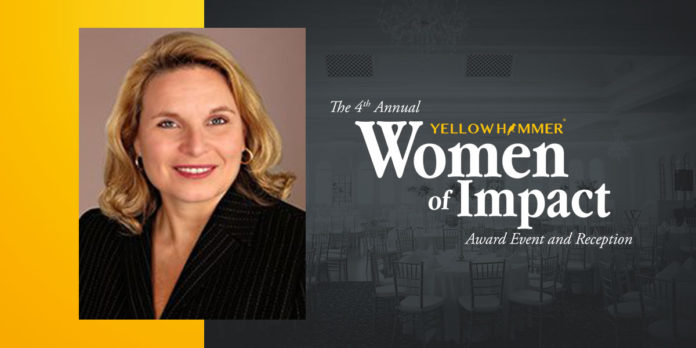 Beth Woodard began her career at PowerSouth Energy Cooperative 30 years ago. She is still there today, as executive vice president and chief financial officer, continuing to make a lasting impact through her strong work ethic and a love of the company — and its employees — for which she has devoted herself.

Woodard received a bachelor’s degree in Corporate Finance and Investment Management, as well as a Juris Doctor from the University of Alabama. Upon graduating from law school in 1990, she began her career in 1991 at PowerSouth, headquartered in Andalusia, and never left.

“The club that I ended up in when I started working here is a really small one,” she said. “We are called G&T lawyers, or Generation and Transmission lawyers. PowerSouth is a G&T and there are about 65 similar G&Ts across the country that generate and transmit wholesale electricity. They all have lawyers, both inside and outside counsel. It’s a small club that I happened to find my way into all those years ago and it’s been a great experience.”

As a G&T lawyer, Woodard started out doing legal work at PowerSouth all those years ago. At the time, the electric utility company, which is composed of 20 member systems in Alabama and northwest Florida, was building a lot of transmission lines. Woodard worked on the condemnation process, essentially taking people’s properties to build power lines to provide reliable electric service. That’s where she started, but it was the people and the company itself — and the work they were doing — that kept her there.

“I found it to be a really good company with really good people,” she said. “Try to imagine life without electricity: It would be really hard. I don’t climb a pole and I don’t turn a wrench, but I do play a part in people getting electricity and so do all of our employees. It takes a lot of cogs to get done what we get done. We provide electricity to close to a million people through our member systems. It’s a vital service and I’m just appreciative to be a small part of it.”

In 2007, Woodard moved to vice president of Legal and Corporate Affairs, taking responsibility for the Human Resources and Safety departments. Later, she was over the Communications and Environmental departments, as well.

In 2018, she was promoted once again to her current position as executive vice president and chief financial officer, the second-highest ranking position in the company — along with the executive vice president and chief operations officer — behind PowerSouth’s President and CEO Gary Smith. In her latest role, she is still responsible for Human Resources, in addition to the Buildings and Grounds, Financial Planning, and Finance and Accounting departments.

PowerSouth has around 515 employees and roughly $2 billion in assets; its revenue will be in the neighborhood of $630 million this year. The power company serves nearly 1 million people in 39 counties in Alabama and another 10 in northwest Florida. A new power plant is currently under construction in west Alabama. The Lowman Energy Center will reside on the site of the old Lowman Power Plant, which was a coal-fired power plant retired in 2020 due to burdensome environmental regulations. The new facility is 540 megawatts and will be commercial in spring 2023.

“We have a lot going on all the time,” Woodard said. “We have a bargained workforce, which means we have union employees and that’s one of my responsibilities. One thing I’m proud of is the relationship we have with all of our employees, our bargained and our non-bargained.”

Woodard’s high-powered job is also high in stress, but she manages to create balance and stay motivated through her “incredible support system,” made up of, first and foremost, her employer, her husband, Allen, and the nanny “Mrs. Audrey” they were “very, very blessed” to find when their oldest child, daughter Callen, was only 10 weeks old. She stayed with the family until Callen and her younger brother, Cameron, went off to college.

Woodard’s children are now a sophomore and a senior at the University of Alabama. Both have their sights set on law school, just like mom (and dad).

“I believe graduate school degrees make you more marketable, skill wise and jobwise,” she said. “Law school, in particular, teaches you how to think and how to examine things. Those are good skills to have.”

Though her children are out of the house now, Woodard’s job is still very demanding. She unwinds in her downtime by enjoying the beach, which is only 65 miles away, spending time with family and utilizing the same University of Alabama tickets they have had for the last 30 years.

Although she is a self-proclaimed “low-key” individual, Woodard — who grew up in Fort Deposit and was surrounded by many members of the Callen and Gibson families who contributed to developing the strong work ethic she has always exhibited — stands out in her profession and continues to make an impact in her field and beyond, particularly with young women.

“One thing I have tried to do throughout my career is to be especially encouraging to women to get their education, to complete their education before getting married or having children,” she said. “Because it just makes it that much harder if you change the order up there. And you can do anything you want to do, you just have to put your mind to it. I want to make sure I’m setting that example for my daughter. The world is her oyster and I want her to go out and grab it.”

Yellowhammer News is proud to name Beth Woodard a 2021 Woman of Impact.

Sara Watkins is a contributing writer for Yellowhammer News and SoulGrown Alabama. You can find her on Instagram here.