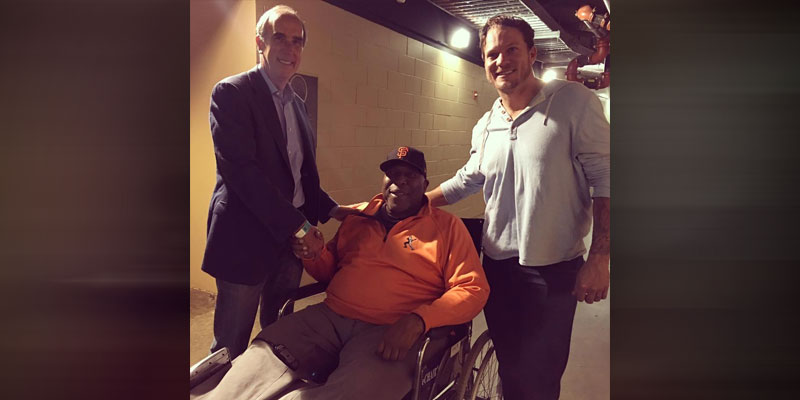 Baseball legend Willie McCovey, now 79, enjoyed a sterling major league career as a first baseman and home run slugger for the San Francisco Giants that spanned 21 years—from 1959 to 1980. He was inducted into the Baseball Hall of Fame only six years after retirement, and in a recent interview with Marc Myers of the Wall Street Journal, McCovey shared fond memories of his childhood in Alabama, despite the challenging aspects of its painful past.

McCovey grew up in Mobile in the 1940s and recalled how painful it is to reflect back on a white man who was only in his 20s coming into their home and calling his father  “boy.”

“That was hard to take,” McCovey told Myers.

McCovey’s dreams were not suppressed by the cultural norms of the past, however, and his Alabama childhood memories are far from all bad. He fondly reminisced of his close-knit neighborhood, friends with whom he played ball, and a loving father and mother, who taught him right from wrong.

“My father, Frank, worked hard fixing tracks for the GM&O Railroad. He wasn’t a large man, but he was strong—and very quiet. When he spoke, we listened. At home, he never raised his voice. But if he had to talk to you about right and wrong, he’d sit you down and you wouldn’t forget it. My mother, Esther, was a loving woman and an incredible, understanding cook. I hated okra, so she’d cook a separate dish for me, or she’d pick out the okra pieces. She wasn’t an “eat it or else” mom.

McCovey also talked about his boyhood chores, which included feeding the family’s chickens.

It was in this loving home that McCovey also fell in love with the game that changed his life.

“At night, we’d gather around the radio to listen to a guy who recreated the play- by-play of major league baseball games by reading the ticker. With sound effects, he made it seem real. My friends and I played sports in the streets or empty fields. We played softball in a large local playground. Jesse Thomas was the director. I pitched and was a better pitcher than a first baseman. But I could hit the ball hard.”

Indeed he could. McCovey would go on to blast 521 homes over the course of his career, becoming one of the most productive power hitters of his era.

In addition to the challenges of a segregated south, the McCovey’s financial struggles also created hardships for the family. In 1954, when he was a high school junior, he was forced to drop out of school to help support his family.

In addition to my paper route, I tried working as a bus boy in a whites-only restaurant, but I quit after a week. All the things that make you cringe was normal talk then. You took it or you walked away. I soon found work at a chicken place. I was responsible for washing the chicken parts before they were put out for people to buy.

The struggles would not interrupt McCovey’s destiny, however. That same December, he boarded a train to Los Angeles to visit his older brother, Wyatt.  Jessie was then a  “bird-dog…who spotted baseball talent for a San Francisco Giants scout named Alex Pompez. He said he told Alex about me. Alex wanted me to report to Florida where the Giants were trying out players.” From there, McCovey told Myers how his journey to the majors began.

From there, McCovey told Myers how his journey to the majors began.

All of the black players slept at one end of an old army barracks. On my first day, I did lousy. Alex came down and asked why I didn’t hit. I said that I was nervous. Alex said, “Well, they see something in you and they’re giving you a chance.” The next day I hit two home runs. The Giants signed me to their minor league system. In July 1959, I had just finished playing a double header in Phoenix for the Pacific Coast League when the general manger told me the Giants were calling me up to the big club. I had to be in San Francisco the next day for a game. I flew up on the first flight out. Horace Stoneham, who owned the Giants, sent his driver to pick me up. I got to the ballpark just in time to get dressed. Bill Rigney the manager, told me I was batting third, between Willie Mays and Orlando Cepeda. My first time at bat I hit a triple. Then I hit a single, another triple and a single. That day I made the team. They called me “Stretch” because I was 6-foot-4.

Willie McCovey never returned to Alabama to live. Today he resides in a home he built in the Bay Area in the 1970’s. “I have a good view of Mount Diablo and Redwood City across San Francisco Bay,” he told the Journal.

“Because of an old baseball knee injury, I spend most of my time in the bedroom watching the Baseball Channel on TV when I’m not at Giants home games,” he said.

Sadly, his father never saw him play for the Giants, but his mother did.

“She didn’t know much about the game. But after, she said, ‘People clapped for you, so you must be doing something good.'” Indeed he was! Alabama’s Willie McCovey will forever remain one of baseball’s all time greatest, thanks in no small part to his Mobile community and the loving home Frank and Esther McCovey worked so hard to provide.