All Eyes on Alabama: A Tale of The Swamp 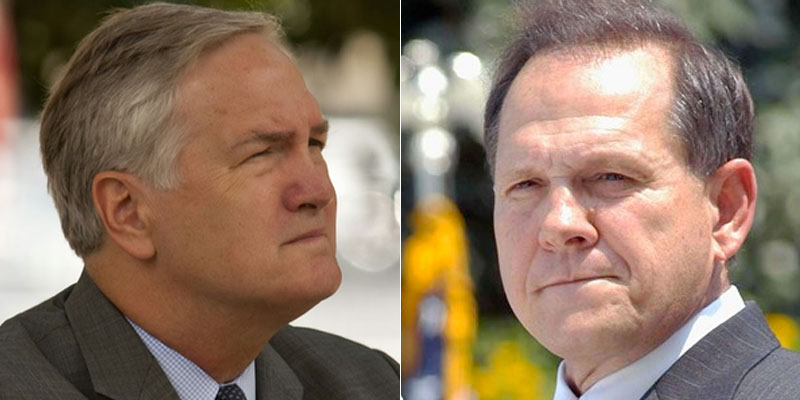 The Senate runoff campaign between Roy Moore and Luther Strange is a big deal in Alabama. Everywhere else in America, it’s an even bigger deal, as all eyes are on the Yellowhammer State these last few days of the campaign.

Why the fascination with Alabama’s Republican Senate primary? Because it’s a commentary on draining the swamp!

The Alabama election is a new chapter in the playbook of the emerging populist movement that swept America last November. It’s a movement fueled by hard-working, patriotic Americans who embraced an American dream that’s turned into a nightmare, and they’re fed up. They’re tired of being told what to do, what to say, what to believe, and how to act. They’re sick of being taxed and regulated out of business, bombed by a radical religion that hates them for no apparent reason, and being labeled hate-mongers for merely saying what they believe. They don’t like being told they can’t have a gun in their truck or that they have to go to jail for clocking some punk who tried to take advantage of their daughter. They’re mad because they can’t say prayers at graduations and high school football games, or wear t-shirts that offend college students in Berkley. And they’re definitely sick and tired of politicians apologizing for all they hold dear to Europeans whose homes their grandfathers saved in places like Normandy, Bastogne, and Losheimergraben. Those grandfathers willingly died on those cold, distant battlefields for the very freedoms that K-Street power players want to take from them, and on Main Street, they’ve had enough. None of this is what they signed up for, and they’re absolutely sick of empty promises from self-serving politicians who say they’ll do something about it but never do. That’s why the swamp must be drained, and last November was just the beginning.

In Alabama, however, swamp-draining isn’t as straightforward as it may seem.

The ultimate swamp-draining icon, President Donald Trump, should have some authority to speak into this issue. After all, he’s the one that gave voice to their frustrations and had the will to stand up to the weak suits of the Republican establishment who said, may it never be.

That same Donald Trump says Luther Strange is the best guy to represent Alabama in the U.S. Senate, a point Strange made abundantly clear last night in the quasi-debate with Roy Moore.

To this, Roy Moore and his supporters say “hogwash.” Many of Moore’s supporters “staked their lives and sacred fortunes” on getting Donald Trump elected last November. Now that Trump is supporting Strange, however, some of the same folks say he’s become part of the problem. Worse still, although Trump was brilliant enough to understand exactly what they needed and astute enough to become their champion, because he now stands with Big Luther they say the President is naïve and deceived. Or at best, they say, Donald Trump has made a bad judgment call. 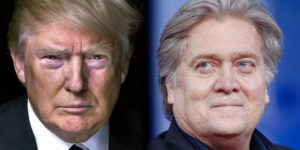 Layered on top of this is what national reporters are calling the proxy war between Donald Trump and his former strategist, Steve Bannon. Since being fired from his White House post, Mr. Bannon and his team at Breitbart are going hard at Luther Strange, but the supposition is that they’re actually going hard at Donald Trump. Whatever the truth may be related to Trump, they’re clearly gunning for Mitch McConnell. Therefore, if Trump and McConnell both want Luther Strange and Trump gets hurt in the tussle, so be it. All is fair in war and politics, and when friends get shot, they just get shot.

Either way, Steve Bannon is a warrior, just like Donald Trump, and if he prevails, swamp draining is about to take on an entirely new identity, and the names and faces of that movement may change. Today, Bannon’s doing his best to make Roy Moore that face.

Another facet of this race is Roy Moore’s war on political correctness and whether or not that informs all of his views. Judge Moore twice defied the law when the law defied his conscience. That’s justified civil disobedience in the minds of many, and all they need to know to deem Moore the epitome of the opposition movement. While the Strange camp raises questions about Moore’s position on the wall, on silencers for guns, and other such things, none of that seems to matter. Moore’s base reasons that if he was willing to get fired twice—over the Ten Commandments and the sanctity of marriage—he will do the right thing all the time. That’s why the likes of James Dobson, Phil Robertson, and Chuck Norris, to name a few, have sided with the “Ten Commandments Judge.”

There’s yet another contingent of voters who comprise some of Luther Strange’s most vocal critics in Alabama. They may not be as much for Roy Moore as they are against Luther Strange. History isn’t easily forgotten in Alabama, and there’s most definitely a never-Strange contingent down here.

As if all this weren’t complicated enough, Roy Moore’s base is pro-gun and pro-life. The two organizations who have the most credibility on these respective issues—the NRA and the National Right to Life—stand firmly with Donald Trump in saying Luther Strange is the best man to defend their values. It’s hardly as if Big Luther’s a liberal and his record on these issues is clear. Nevertheless, a perusal of social media indicates that the die has been cast for a certain block of voters. To hear them talk, if you’re against Roy, you’re on the wrong side of the cornfield, and the shootin’s started, so you’d best keep your head down unless you wanna get shot too.

To spread one more course on this five-layer cake, the Democrats see all this friend-shooting as the most serendipitous of all scenarios. From where they sit, the Republicans have been reluctant to take a stand on anything in forever, and once they finally got mad enough to do something, instead of going after the enemy they’ve started killing one another. Everyone knows a house divided can’t stand for long, so the Dem’s are tickled pink. Enter Uncle Joe Biden, and heaven knows who else for Doug Jones, the man who will face the winner of the Moore-Strange cage match. So now Republicans must also ask, will Jones gain traction from this summer’s nuclear fallout?

When it’s all said and done, come Tuesday night the ultimate factor in who represents the G.O.P. against Doug Jones and Uncle Joe will be decided by how much sway Donald Trump and Mike Pence bring to Alabama this weekend. If the original, bona fide swamp drainer can convince enough Alabamians that he needs a Senator he can rely on to help him drain the swamp, Luther Strange is likely to be the man. If Bannon and team can convince enough Alabamians that Luther will be beholden to Mitch McConnell and will be part of the swamp, Roy Moore will likely be the man.

Whichever man it is, the swamp is a strange place indeed, and few know what truly lurks there.