Elizabeth BeShears
November 6, 2015
BIRMINGHAM, Ala. — Layoffs at several of Alabama’s coal mines over the last few months have left hundreds of families wondering how they will be able to provide Christmas for their children. A group of Alabamians is rallying to make sure these families still get to experience all the magic and warmth of the season, despite the hard times.

The Facebook Group “Adopt A Steel Worker’s/Coal Miner’s Family For Christmas,” Alabamians are working to provide toys, clothes, and food for the affected families.

“As most know by now, many of our local steel and coal workers were recently laid off,” wrote founder Lacey Marchant in the group’s description. “Seeing as Christmas is right around the corner, my hope is that we can come together as a community and help those affected to not feel the strain quite so much this holiday season. Whether it’s donating gifts for children, money for the families, or some other type of help, I believe it can be a blessing to these families.”

Alabama’s Walter Energy laid off about half of its remaining workers this week, totaling 265 employees, at its No. 7 mine in Brookwood.

This is the latest of several rounds of layoffs Walter Energy has had to make this year, already laying off 194 workers at its No. 7 mine were laid off over the summer, in addition to 129 layoffs at the Brookwood No. 4 mine in October.

In addition to the Facebook effort, a Go Fund Me hoping to raise $10,00 has been established, and a “Toys for Miners” event will be held in Brookwood, Alabama, next month. 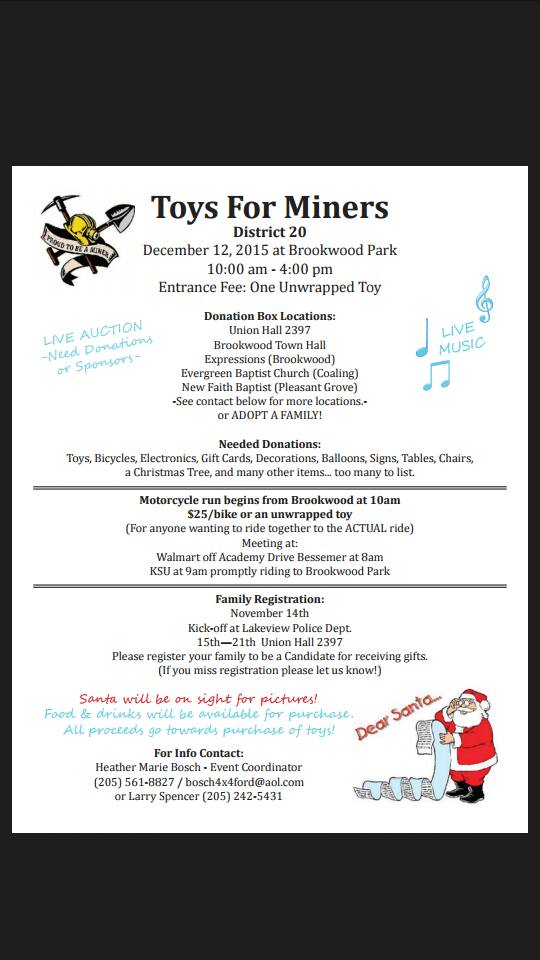 “We went to a company and union meeting and as I watched the men in the latest layoff, which amounted to 266 workers, I began to cry as I watched these men clean their lockers with a look of defeat on their faces,” wrote Stephanie Tingle, the wife of a coal miner affected by recent layoffs at Walter Energy, in the Go Fund Me. “During the meeting the District 20 Field Rep mentioned finding ways to aid the families of these laid off workers during Christmas. When I first learned of my husband being laid off all I could think of was my house, my car, my current lifestyle and how all that would change. That meeting changed my persepctive (sic). These children of these worker’s may not have a Christmas.

“A few guys offered to help sponsor a child and I wanted to grow that idea as best as possible,” Tingle continued. “I want to give back because as wonderful as Christmas was for me personlly growing up, I would never want to see a child suffer through the holidays. I decided to begin with this gofundme account. Every single penny is strictly for Christmas for the children of these men who unfortunatley were laid off during the holiday season. I plan to purchase as many toys and/or bikes as I can make stretch with any money I can raise to help these men, women and their children.”

The sort of layoffs and struggles currently being experienced by coal workers in Alabama right now have been predicted for years, after the Obama administration began implementing what opponents call “the war on coal.”

In 2014 Alabama coal worker Walter Parker testified before Congress, presenting an emotional picture of what would happen to his family if Obama’s policies were enacted.

In the end, most people here will not wonder or care what happens to my wife and kids if I no longer have a job.

No one is thinking about the burden my family and my co-workers will face if we no longer have a job, a steady paycheck, or if there are no more contributions to the UMWA health and retirement funds.

No one will care until the money runs out and the government… which is killing our jobs, must pay the price of unemployment benefits, welfare and public assistance, which is running rampant in our country today.

I am proud that I have been able to take care of my family because of the work I do. I am proud to be a miner. I have never asked for handouts from the people around me or from the government. I want to pay my own way. I want to work. I feel pride in my work. I want to be able to continue my profession and produce coal to power this nation. And I’m sorry that I get emotional, but I can’t help it.

In the end, I don’t see the Agency’s proposed policy as a real solution. We will lose what we have worked for all of our lives and our communities will struggle in poverty. How can the EPA call this a success story?

Those interested in helping provide Christmas for these families can either visit the Facebook page or the Go Fund Me.