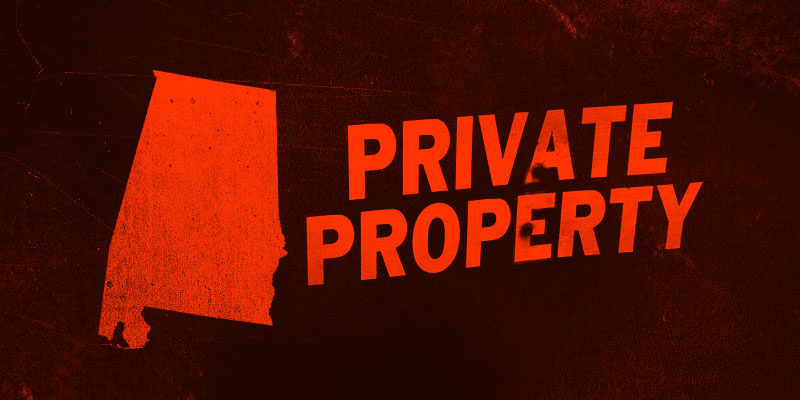 Private property rights are one of the fundamental tenets of our Republic. Enshrined in the Fifth and 14th Amendments are clear protections for private property, banning the government from seizing property from private citizens without due process of law.

Unfortunately, in many states, including Alabama, the laws governing seizure have been crafted in such a way that property can be seized without a conviction. Even worse, some states have even made it difficult for citizens deemed innocent to retrieve their property.

This controversial legal process—known as civil asset forfeiture, or civil judicial forfeiture—occurs when a law enforcement agency takes personal assets from individuals or groups suspected of a crime or illegal activity. The persons or groups having their assets seized do not necessarily need to be charged with a crime for the confiscation to occur. The standard of proof for seizure differs from state to state.

The standard of proof required for seizure and the severity of civil asset forfeiture laws vary, but Alabama’s laws are particularly egregious, because they give law enforcement agencies a tremendous amount of latitude when taking property and near-complete control over the assets they seize—and all with virtually no transparency. Analysts at the nonpartisan Institute for Justice have given the State of Alabama’s civil asset forfeiture laws a grade of D-, one of the lowest grades in the country.

There are three major problems with Alabama’s civil asset forfeiture laws. The first is its appallingly low legal standard of proof required for seizure. In Alabama, the government is typically required to demonstrate to the court’s “reasonable satisfaction” that the property is related to criminal activity; this standard is essentially equal to the preponderance of the evidence standard used in civil lawsuits.

While other states have used this standard in the past, the overwhelming trend has been to move away from this lax standard. Since 2014, 24 states have comprehensively reformed their forfeiture laws, with 14 states now requiring a criminal conviction before assets are seized. Alabama should join these states.

The second major issue with Alabama’s civil asset forfeiture laws is how the funds are used after seizure. Under current law, Alabama law enforcement agencies can keep 100 percent of forfeiture proceeds, and those seeking to reclaim their property bear the burden of proving their innocence, unless the property at issue is real property, like a home. This means law enforcement agents, who already have too much power to seize property, are incentivized to seize as often as possible.

The third flaw in Alabama’s law compounds this lack of limits by requiring virtually no transparency in the seizure process. There is no way to measure the extent to which Alabama’s law enforcement agencies use civil forfeiture, because Alabama does not require law enforcement agencies to track or publicly report their forfeitures or expenditures. This creates a dangerous lack of transparency and accountability.

Fortunately, Alabama is now contemplating making major reforms to its civil asset forfeiture laws that would address many of these issues. The Alabama Forfeiture Accountability and Integrity Reform (FAIR) Act, now under consideration in Alabama, would require a conviction before property can be seized and the creation of a case-tracking system and searchable public website, which would include information about the property seized and forfeited under state law, finally bringing accountability and transparency to the seizure process.

One influential story, first reported by AL.com, helped to expose the abuse of forfeiture in Alabama and has had a far-reaching effect on the public’s opinion of civil asset forfeiture. In 2010, Frank Ranelli’s computer repair shop was raided by Alabama law enforcement agents because they allegedly received a tip suggesting Ranelli had been selling stolen goods. During the raid, police seized around 130 computers from the shop, many belonging to his customers. Ranelli was later cleared of any wrongdoing, but he has yet to have the seized property returned to him. Incredibly, this happened seven years ago.

While proponents of civil judicial forfeiture argue it’s an important tool agencies can use to fund their enforcement efforts—thereby transforming property illicitly gained by criminals into resources that can be used for public benefit—Alabama’s forfeiture laws give agencies far too much leeway and economic incentives to seize property without establishing a crime was committed, penalizing innocent property owners in the process.

Assets should be seized only when guilt has been established in a court of law, and law enforcement should not have incentives to seize any more property than is necessary and justified. Alabama legislators should take steps to remove the incentive for police to unjustly seize assets and ensure clear evidence exists before property is taken.

Matthew Glans (mglans@heartland.org) is a senior policy analyst at The Heartland Institute.